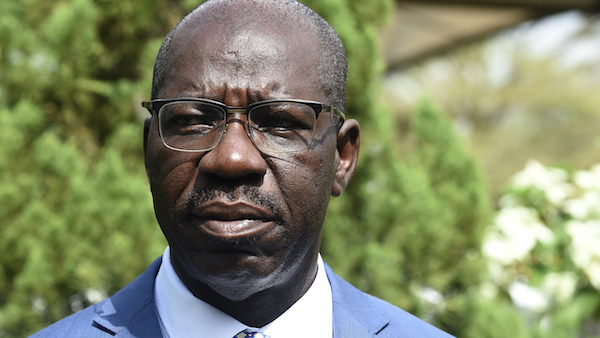 The All progressives Congress (APC) has said the decision by Governor Godwin Obaseki to defect to the opposition People’s Democratic Party (PDP) did not come to it as a surprising development.

Spokesperson of the APC, Malam Lanre Issa-Onilu gave the reaction while speaking with journalists in Abuja.

“It has not come to us as a surprise. We knew he had defected long ago because he resigned his membership of the party which we have accepted,” Issa-Onilu said.

“So you can’t defect twice. So if he is defecting again, we don’t know whether what he has just done now is news any longer,” he said.

It would be recalled that Obaseki officially joined the PDP on Friday, June 19, 2020.

After the defection, the governor wrote on his Twitter handle, @Governor Obaseki, “I have officially joined the @OfficialPDPNig to advance my ambition to seek re-election as Governor of Edo State.

“I, as always, remain committed to engendering good governance and sustainable development of our dear state.”

The PDP equally wrote on its official Twitter handle, “Breaking News! The governor of Edo State, H.E. @GovernorObaseki has defected to our great Party, the @OfficialPDPNig.

“The declaration was made this afternoon at the state Secretariat of our party in Benin city, Edo State. Power to the people.”

Obaseki had since Tuesday, June 16, after meeting with Ibrahim Ganbari, President Muhammadu Buhari’s Chief of Staff (CoS), announced his resignation from the APC.

His deputy, Philip Shaibu, like his principal, also dumped the APC.

Obaseki had assured his supporters he would soon announce his next move.

He is expected to now contest the state governorship election ticket with other PDP aspirants on June 23.