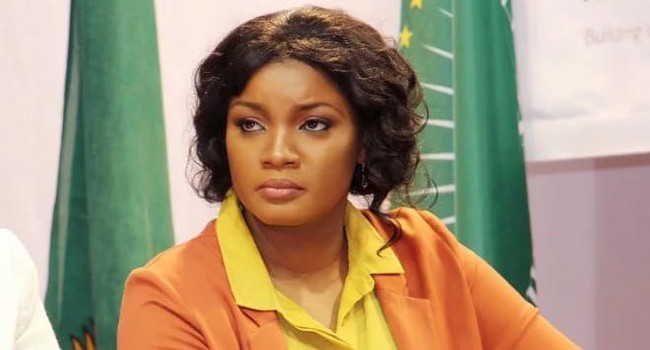 The ruling All Progressive Congress (APC) has reacted to the controversial ‘hellish’ comments made by Nollywood actress Omotola Jalade-Ekeinde which has sparked reactions.

Omotola had days ago, in a strongly worded message on her Twitter page, described the state of Nigeria under the watch of President Muhammadu Buhari and VP Yemi Osinbajo as ‘hellish’.

She also lamented the mass killings of innocent citizens in Zamfara State and complained about a lack of cash in circulation which is making citizens face hard times.

Reacting to the comments by the actress, the APC stated that the concerns of the actress that President Buhari should ensure that adequate money in circulation has been noted and being worked upon.

The APC in a tweet on its official page wrote: “Dear @Realomosexy, your advice to President @MBuhari and VP @ProfOsinbajo on ensuring ‘adequate money in circulation,’ among others, has been noted and being looked into. We thank you for your interest in seeing this admin succeeds.”

Recall that Senator Shehu Sani, the lawmaker representing Kaduna Central in the National Assembly, reacted to the controversial comments made by Omotola.

In Twitter post on Tuesday, Senator Sani said the comments of the actress is a reflection of the standpoint of millions of poor Nigerians who are going through tough times under the current administration.

Reacting to the comments of the actress, Sani said;“Omotola’s view reflects the views of millions of poor Nigerians; throwing mud on her cannot twist the reality,” the senator wrote on Twitter.

More cracks in APC as North Central kicks against zoning of Speaker to S’West, endorsement of Gbajabiamila