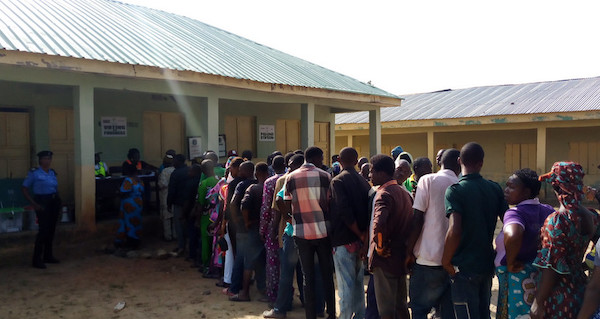 The Adamawa State chapter of the All Progressives Congress (APC) has described the local government council elections conducted in the state on Saturday as “a selection backed by law enforcement agents.”

Although the results had not been officially announced by the Adamawa State Independent Electoral Commission (ADSIEC), APC rejected the outcome of the polls.

Unofficial results indicated the ruling Peoples Democratic Party had swept all 20 chairmanship seats from results collated so far by ADSIEC.

APC alleged that it was not conducted in compliance with the provision of the Adamawa State electoral law.

“Therefore, it is undemocratic and a clear display of an act of selection backed by law enforcement agencies.”

The APC also lamented that the elections “fell far below standards because 95 per cent of ad hoc electoral officials recruited by ADSIEC for the exercise” were allegedly PDP card-carrying members.

Speaking to newsmen on behalf of the party on Sunday in Yola, the party’s legal adviser, Mr Shagnah Pwamaddi, said that the party would do everything within the law to seek redress.

“The recently conducted election is a complete sham, undemocratic and below standard of what we call election.

“This is selection that was perpetrated under intimidation and inducement. We are not going to accept it,” Pwamaddi said.

In his reaction on the election, an APC chieftain and former Secretary to the Government of Federation, Mr Babachir Lawan, in a statement said no election was conducted in his local government (Hong).

“In spite of assurance by the Adamawa state governor that there will be an open, free and fair LGA elections, there was no election in Hong LGA even in a single polling unit.

“No election materials and no election officials were sighted anywhere in the LGA up to 4 pm on Saturday when I returned to Yola.

“It’s such a shameful treatment of our people of which we have taken note.

“We had expected this state government to conduct a credible election because it will not have come to power if the federal government had not allowed INEC to conduct a free and fair election,” Babacir said.