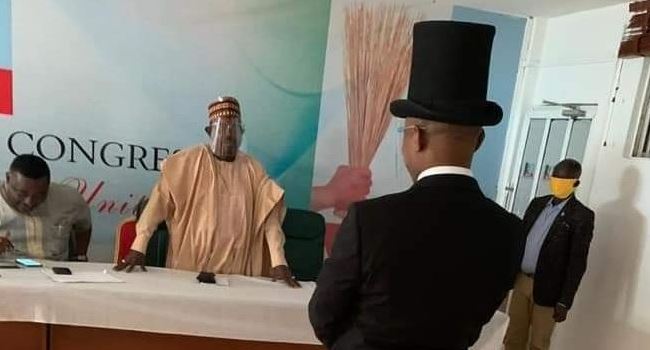 The All Progressives Congress (APC) has sworn in Worgu Boms as the party’s new deputy national secretary.

With the development, Borns, a former attorney-general of Rivers State, has replaced Victor Giadom as the party’s deputy national scribe.

Boms was sworn in at the APC national secretariat on Monday, in Abuja.

The development came after Giadom declared himself as the acting chairman of the party, following the Appeal Court’s affirmation of Adams Oshiomhole’s suspension as the APC’s chairman.

The APC had through, Hilliard Eta, its vice-chairman (South-South) on Saturday, June 20, said Giadom lost his position as the party’s deputy national secretary when he resigned to be a running mate to Tonye Cole, Rivers governorship aspirant in the 2019 election.

Etta, then, said that Boms had been recommended by the party in Rivers to take up the position formerly occupied by Giadom.

Giadom had denied that he resigned his position as claimed by Etta.

Also, Salihu Mustapha, APC North-East vice-chairman, had also said that Giadom did not resign his position to contest the election.

According to Mustapha, instead of resigning, Adams Oshiomhole gave Giadom a waiver in September 2018 that enabled him to seek the deputy governorship position of Rivers and discharge his duties as deputy national secretary.

Mustapha said in a statement on Sunday, “Just like Giadom, Chief Moghalu came back as national auditor when he lost the primary election of the party in Anambra state.”

The crisis within the ruling party has continued to threaten the party apart, as different factions seemed to have emerged, pushing their own individual agenda.