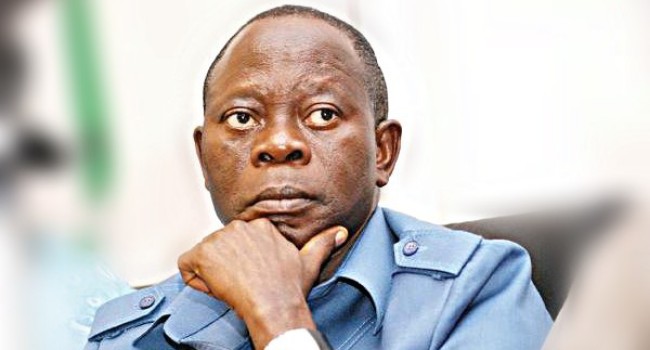 Like coronavirous which continues to defile measures by spreading from person to persons, country to countries, and continent to continents, the battle for supremacy in the All Progressive Congress (APC) has continue to move from ward to wards, State to States, and even rode from the upper chamber of the party to affect the court system which led to the pronouncement of conflicting judgements by the court of coordinate jurisdictions in less than 24 hours.

On 4th March, 2020, a judge of the Abuja High Court, Justice Danlami Senchi, granted an interlocutory injunction restraining Adams Oshiomhole from functioning as national chairman of the APC and ordered the security agents to prevent him from accessing the party’s Secretariat pending the determination of a suit challenging his membership in court.

Surprisingly, in less than 24hours, a Federal High Court sitting in Kano, presided over by Justice A. Lewis-Allgoa, which is a court of equal jurisdiction with the Abuja High Court, gave a contradictory order and mandated the security agents to escort Oshiomhole to the party’s Secretariat.

This dramatic display created a dilemma for the security agencies before the Inspector General of Police (IGP) Idris Adamu warned Oshiomhole not to go near the party’s Secretariat. Before the judicial confusion, the party had set up a reconciliatory committee headed by Chief Bisi Akande in order to resolve series of crises rocking the party, especially, the supremacy tussle between Governor Godwin Obaseki and Oshiomhole and other aggrieved parties in APC.

This supremacy tussle lead to the creation of factions within the party in Edo State and the suspension of Oshiomhole at his ward in 2019. It got to the climax with the attacks and counter attacks on both actors.

Similar struggle necessitated the APC parallel party in Ogun State, Imo State, among others when the anointed candidates of the Governors were edged out of the political race at the primaries due to Oshiomhole’s stands on party supremacy. Infact, it was this battle that lead to the internal crisis that set the party on a sucide misson in Rivers State and Zamafara State before it was “finally approved by the Supreme Court’s judgement.”

Ordinaryly, one would have expected the party to have learnt from their mistakes and work on the installation of internal mechanism that will engender party supremacy and reduce the fear of bloc exclusion and marginalization. Instead, the blocs continue their egoistic display even as they trend the path of political self-destruct.

Before the battle became a public display, there have been predictions from different quarters that the APC might not live beyond 2023, because of the conglomeration of power blocs that look like birds of different feathers flocking together. This prediction is gradually showing a sense of manifestation as the embattled chairman and those behind his removal are no more hidding their ambition to prevent anybody from edging out their blocs from the political calculous comes 2023.

APC was formed in 2014 by consensus among different political parties such as CPC, ACN, New-PDP and others in order to change the party in power but since they have taken over, they have failed to really live beyond their former indentity thereby creating a battle ground for blocs supremacy tussle in the party. Constant effort to resolve this battle has been proven abortive because of the high level of suspicion.

Infact, it was the quest to resolve this battle that led to the emergent of Oshiomhole as the chairman of the party as it was so obvious that the “bishop approch” being used by Chief Oyegun will definitely not resolve the supremacy tussle among blocs which was gradually corroding the tenent of it’s formation and displine among members.

However, those that packaged Oshiomhole as a principled man never knew he will act beyond the expected limit by stepping on their toes in the last party primaries election while those that have their primaries ahead are worried of what is likely to come if he remains the Chairman. It is this fear of unknown that necessiated the call for his removal.

Though, Oshiomhole created a fertile ground for this suspicion at the last party primaries election by using an open ballot system in some states while in another applied a closed ballot system which some of the blocs see as an agenda to out smart their blocs in the political calculation comes 2023. In an unhealthy environment like this to have party supremacy will be difficult because the ‘big wings will find it difficult to lay down their feathers’ due to mutual suspicion.

This was one of the reasons the People Democratic Party (PDP) failed in 2015. Unfortunately, the party that rode on the mantra of Change and Next Level to the Aso Rock has embarked on the same path.

In order to avert this, the power blocs within the party must be ready to sacrifice their political ego on the alter of party supremacy and interest because if this is not done, the trumpet of bloc supremacy at the detriment of the party will continue to resonate irrespective of who is heading the party affairs.

On Sanusi’s dethroning: The north only beheads the bearers of truth