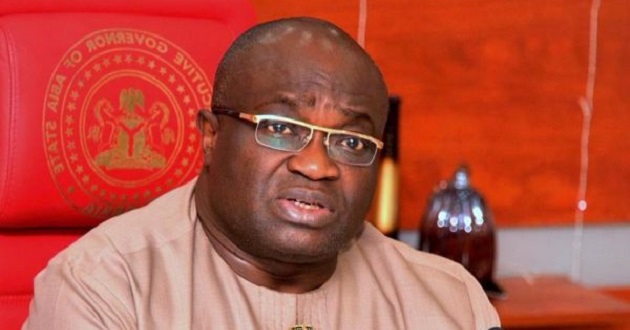 The All Progressives Grand Alliance (APGA) in Abia has cried out over what it claims is a dangerous development in the state.

The party also asked the Inspector General of Police, Mohammed Adamu, to save citizens from Okezie Ikpeazu’s government.

In an open letter to the IGP, the party accused Ikpeazu’s government of indulging in acts that posed serious threat to security of lives and property in the state.

The letter addressed to the IGP and made available to newsmen on Saturday was signed by the Abia State APGA chairman, Nkem Okoro and the party secretary, Onyebuchi Onyegbule.

It read, “We of the All Progressives Grand Alliance (APGA) Abia state are constrained to bring to your esteemed attention some very dangerous developments in Abia State, which pose a serious threat to security of lives and property in the state, and which if not tamed, could lead to an uncontrollable breakdown of law and order, as well as possible loss of innocent lives.

“Specifically, in the last few days, an audio recording of a phone conversation involving the Senior Special Assistant to the Governor of Abia state on General Duties, and a very close ally of the governor, Mr. Uchenna Erondu Junior, and a citizen of the state, Mr. Ogochukwu Nwaokeoma has been trending.

“In the said conversation, Mr. Erondu called Mr. Nwaokeoma on phone and warned him not to henceforth, write anything against the Abia State government including salary arrears, pension arrears and other failings of the administration. Mr. Erondu went further to threaten the young man that should he go against his advice, he should be prepared to end up like Mr. Erondu’s biological elder brother, Mr. Azubuike Erondu, popularly called MOPOL who had been in police detention for weeks at the Force Headquarters in Abuja.

“He went further to cite a case of one Augustine another government critic who was ruthlessly dealt with and silenced permanently. He challenged Mr Nwaokeoma to go and make enquiries about the said Augustine. Following the threat, Mr. Nwaokeoma is reported to have gone into hiding and is unable to write his examinations as an ND2 Student of the Abia State Polytechnic Aba fearing for his life which is now in danger”.

READ ALSO: 2023 PRESIDENCY: Ex-SGF Lawal says Ndigbo are their own enemies, not north

Among other allegations, the party said, “Sir, there have been other numerous acts of violence and threat to lives of many innocent citizens from government quarters. History has proved that the easiest route to anarchy, especially in a democracy is when a non performing government assumes the extreme notoriety of violently shutting up the citizens from making legitimate democratic demands. We, therefore, on behalf of millions of Abia citizens who are presently in a state of panic and agitation, sincerely appeal that you use your good offices to intervene and ensure that the force is not used for vendetta against innocent citizens.”

The party asked the IGP to “specifically cause an investigation into the circumstances surrounding the arrest and continuous detention of Mr. Azubuike Erondu (MOPOL) who had already raised an alarm over an alleged plot to poison him in detention given the disclosure from the recording that the government has a hand in his travails”.