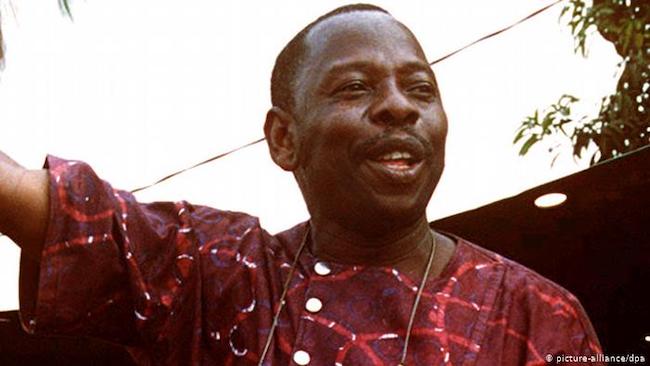 The Ijaw National Congress (INC) on Saturday asked the Federal Government to apologise to the people of Ogoni land and the entire Niger Delta for the wrongful execution of a playwright, Ken Saro-Wiwa, and eight others 26 years ago.

President Muhammadu Buhari on Friday declared his intention to grant state pardon to the activists who were executed by the late dictator, Gen. Sani Abacha’s administration on November 10, 1995.

The special military tribunal set up by the Abacha regime sentenced the nine men to death by hanging for allegedly masterminding the gruesome murder of some Ogoni chiefs at a pro-government rally in the Niger Delta.

The incident occurred during the height of Saro-Wiwa’s non-violent campaign against environmental degradation and perceived injustice in the region.

The execution of the Ogoni 9 sparked global outrage with the United Kingdom, the United States, and the Commonwealth imposing stiff sanctions on Nigeria.

The INC President, Prof. Benjamin Okaba, who reacted to the proposed state pardon for the slain Ogoni activists in a statement in Yenagoa, described the move as laughable.

He noted that the plan fell short of the people’s demand for resource control.

He insisted that the government should apologise to the people of the Niger Delta for killing the activists over their peaceful campaigns against economic exploration, environmental degradation, and gross abuse of their rights.

The statement read: “We wonder what crime Ken Saro-Wiwa and others committed that warrant state pardon. Secondly, even if he was allowed the defence, was he given the right of appeal? What are the positive aftermaths of Ken Saro-Wiwa’s agitation?

“Would there have been the UNEP Report on Ogoni clean-up if Ken Saro-Wiwa and others did not draw the attention of state and international community to various human and environmental infractions meted out to the people?

“Now that the Federal Government has suddenly realized their wrongs and equally expressed willingness to seek reconciliation and national integration, we urge them to courageously go the whole hug as follows:

“Bring to book all persons, including the presiding judge and other officers that were, directly and indirectly, involved in the unfortunate murder of the Ogoni 9.

“Justice should also be extended to the innocent Ogoni youths and other Niger Deltans who were unlawfully massacred by state operatives for merely displaying green leaves in condemnation of the fatal act.”

Okaba said the last few words of Saro-Wiwa, “You can kill the messenger, but not the message,” continued to reverberate several years after as Ogoniland, Ijaw nation and the entire Niger Delta continued to suffer injustices, inequalities, and rape of their freedom and right to control their God-given resources.

Related Topics:Saro Wiwa
Up Next