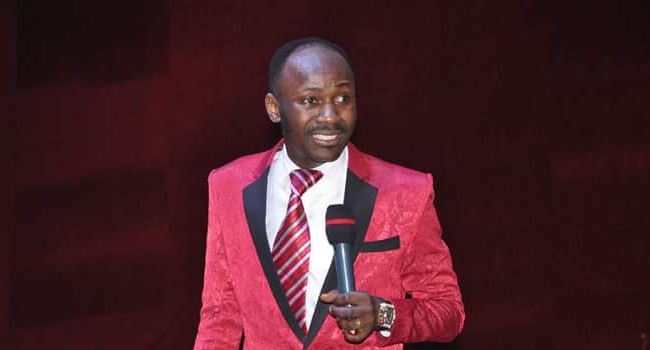 The General Overseer of Omega Fire Ministries, Apostle Johnson Suleman has taken a sly dig at the electoral process in Nigeria stating that politicians need not do well in elections, but in court to get their mandate.

Apostle Suleman made the comments on Friday while reacting to the Supreme Court Judgement which sacked David Lyon of the All Progressives Congress (APC) as the winner of Bayelsa governorship election.

In a message on his official Twitter handle, the clergy who was miffed at the judgement of the Supreme Court described the development as a political quagmire, catalytic and an epileptic electoral process.

“So even if you don’t do well in the election just be ready to do well in court, the process is political quagmire, catalytic and epileptic electoral process,” the cleric added.

The Bayelsa State governor-elect and his deputy, Biobarakuma Degi-Eremieoyo, were on Thursday sacked by the Supreme Court.

While delivering the lead judgement, Justice Ejembi Eko, upheld the November 12, 2019, Judgement of the Federal High Court in Abuja that disqualified Degi-Eremieoyo being a part of the November 16 governorship election.

The Supreme Court further held that since Lyon and his deputy held a joint ticket, Degi-Eremieoyo’s disqualification invalidated their nomination by the All Progressive Congress (APC)

The court thereafter ordered INEC to immediately withdraw the Certificate of Return issued to them and issue a fresh one to the party that secured the second highest number of votes and got the required constitutional spread.