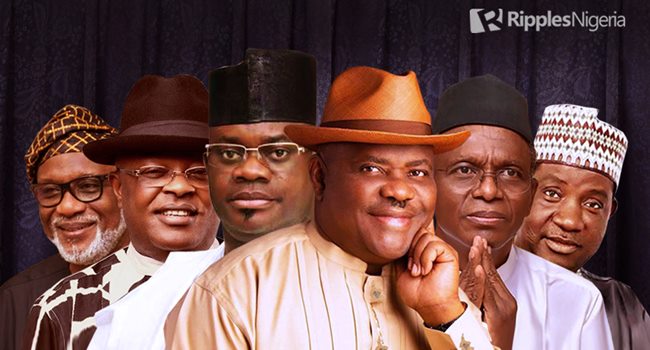 Ranking Nigerian Governors, a major offering of Ripples Nigeria that is currently in its third year since making its debut in August 2019, is a medium through which performances, both in policy pronouncements and actual actions at the state level, are weighed. The purpose of this is to depict whether or not administrations at that level have impacted the lives of Nigerians within a month’s span.

In the three years the rankings have run, during which period its reach and impact have expanded tremendously, we have remained guided by the fact that governance in this part of the world is burdened by challenges. These include fast-dwindling resources, worsening insecurity, and constitutionally-imposed limitations on the governors’ powers.

We also recognise that in all of these, Nigeria remains a hugely blessed nation with abundant human and natural resources, such that it should have nothing to do with the tag of a developing or third world nation.

The potentials are huge, the expectations have always been sky-high, but governance has sadly held the nation back.

In recent times, governance in Nigeria, taken as a multifaceted endeavour, seems to have taken a back seat due to the deteriorating security situation in the country as state governors, overwhelmed by the activities of bandits, terrorists, kidnappers and other criminals, have been forced to adopt strategies and decisions, many of which are unpopular and pedestrian.

Ranking Nigerian Governors in July/August examined the ‘pedestrian’ measures taken by the governors of Zamfara, Kaduna and Katsina states, and of course, the too-little-too-late set of actions by Plateau State Governor, Simon Lalong, to control the violent eruptions on the Plateau.

In total, governance— impactful actions and policy pronouncements and initiatives that are capable of providing succour for residents— descended into the abyss!

For the month under review, September, Nigerian Governors continued with the wobbling and fumbling witnessed in the months of July and August, as they, polarised by regional politics, threw caution to the wind as they engaged in a shameful war of words.

The governors, operating under the Southern Governors Forum and the Northern Governors Forum, engaging in the politics of 2023 presidential election, decided to play to the gallery and resort to cheap name-calling, thereby heating up the polity and endangering the already fragile peace and unity of the country.

Though we acknowledge the right of political actors to play politics along their personal interests or regional preferences, it is, however, baffling that state governors, within a unifying body as the Nigeria Governors’ Forum (NGF) could not use the platform offered by the NGF to iron out their differences without washing their dirty linen in the open.

Ripples Nigeria notes that because of the controversies occasioned by the war of words by Southern and Northern governors, various groups, most of them ethnic champions, and individuals with ethnic and regional agenda, have continued to issue statements and make comments that are heating up the already tensed atmosphere in the country.

It is our understanding that the Nigeria Governors’ Forum, from all intents and purposes, provides state governors in the country a forum to discuss burning national issues and take positions that have often times shaped national discourse. It is on this note that we find the open display of animosity and utter disregard for decorum by the governors nauseating and completely in bad taste.

We also find the current display of animosity on the agitation for the zoning of the 2023 presidential tickets of various parties in the country an aberration, knowing that the governors should have been more concerned about the increasing insecurity in the country instead of dissipating energy on which zone is to produce the President come 2023, a task we honestly believe should be the responsibility of the various political parties, one that must be done without jeopardising the nation’s peace and fragile unity.

On the whole, we find worthy of mention the decision of the Northern Governors Forum to defer discussions on the vexatious issue of the collection of Value Added Tax (TAX) by state governments out of respect for the pending appeal before the Supreme Court of Nigeria.

We reckon that if the governors, from both divides, had taken time to display restraint and maturity in dealing with the issue of zoning of the presidency for the 2023 general elections, the polity would have been saved the current anxiety being experienced because of which zone should produce the President.

We believe that the Nigeria Governors’ Forum as a body must put its house in proper shape so as to save the nation from the current anxious reactions from different sections of the country.

NIGERIAN GOVERNORS: Zulum stands out in Oct, as quality of governance sinks deeper