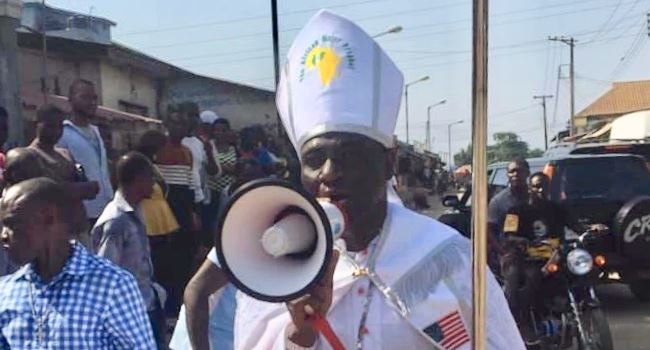 A clergyman, Archbishop Samson Benjamin yesterday staged a protest calling on the government and telecom companies in the country not to implement the Fifth Generation Mobile Networks (5G) technology in Nigeria.

According to him, the 5G technology has health implications as it emits a lot of radiation into the atmosphere and causes a lot of illness.

Archbishop Benjamin, who is the founder of Resurrection Praise Ministry, Worldwide during a protest around parts of Ojo Local Government Area of Lagos State called on Nigerians not to accept the 5G Tech to be deployed in the country.

He implored Nigerians to watch what he said, was an expository sermon by Pastor Chris Oyakhilome, in order to understand what the dangers inherent in the 5G Tech.

While commending the Federal government for its recent stand on the deployment of the 5G Tech in Nigeria, he also called on President Muhammadu Buhari to take another look at the issue, and the kind of issues raised around it in other advanced nations of the world.

Recall that the federal government, through the Minister of Communications and Digital Economy, Dr Isa Ali Ibrahim (Pantami), while reacting to a public outcry over the use of Fifth Generation Mobile Networks (5G) in the country, had said no license had been issued for 5G in Nigeria.

“Nigerians should come out and speak against the 5G Tech. It’s not good for us. We are not going to accept it.

“This is a conspiracy. People who do not love us, want to come to Africa, to cause damages. We must shut our doors against them.
“China is number one suspect of the corona virus. Nigerians say no to China corona-infected products, and aids. We don’t want their help”, he said.

He further implored govt to listen to Nigerian doctors, who under the aegis of the Nigerian Medical Association (NMA) on Sunday rejected the Federal Government’s invitation of Chinese doctors into the country under the guise of offering assistance on how to tackle the coronavirus pandemic.

The NMA aim a statement signed by its president, Dr. Francis Faduyile, had expressed total disappointment with the federal government’s decision to invite Chinese doctors into the country at this time of a global pandemic.

Reacting further, Archbishop Benjamin, who had earlier also taken to the streets in providing foodstuffs and cash to people in some parts of the state, to ameliorate the stay-at-home directive from government, said “The anger of Nigerians is building up. They want to sell a product to us that will reduce our population. Our population is our strength. 5G technology is a weapon of mass destruction. Africans, and Nigerians in particular should not accept it.

He therefore, called on on MTN Nigeria, and other telecommunications companies in the country, to remove the masts that have been erected to demonstrate the technology in Nigeria

He also called on the presidency, National Assembly, state governors, and state houses of assembly to stand up for the people and protect them from this harmful technology.

“The economic and financial benefits of the Tech if allowed into Nigeria is not worth the lives of Nigerians. Do not allow what will destroy the people that voted you into power.

“They think that with their money they can come into Africa and begin to kill us. But they have to know that there are people who don’t value money, or material things, and this people will stand against their evil plans” he said.