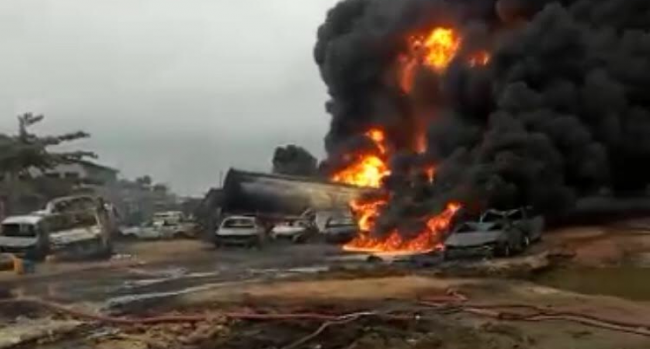 Nigeria Army on Saturday said no fewer than four trucks loaded with smoked fish and some animal hides belonging to Boko Haram insurgents have been intercepted and publicly set ablaze by the military in Maiduguri.

The Theater Commander, Operation Lafiya Dole, Olusegun Adeniyi, said the trucks were intercepted on August 16 by officials of the Nigeria Security and Civil Defense Corps (NSCDC) while on patrol along highways leading to the Lake Chad area.

Recall that the military and government of Borno State had placed a total ban on all fishing activities around Lake Chad, based on the intelligence that such businesses have been hijacked by the Boko Haram.

The military imposed strict sanctions on offenders including the burning of the items alongside the vehicles used in the transportation.

While speaking with journalist at the outskirt of Maiduguri where the four vehicles, comprising two Toyota Land Cruiser trucks, a pick-up van and a Peugeot 504 salon, were set ablaze, Mr Adeniyi said the exercise will send strong message to partners of Boko Haram in the state.

The major-general said one of the strategies being deployed by the military is to cripple the Boko Haram economy so that the insurgents would not have the oxygen to continue carrying out their “evil attacks on innocent Nigerians.”

“Fishing is one of the major source of income that boosts the Boko Haram economy,” he said

“Unfortunately, people from liberated areas who have no regards for lives and properties, or regards for the national cause to end this insurgency, and the common criminals who make money from everything, do go to Boko Haram camps, buy this fish, then bring it to sell in our markets.

“So, with that, Boko Haram now has a running economy that is generating funds for their dastardly activities.

“Therefore, the authorities said no, this cannot be allowed to go on.

“Though we have fully recognised the legitimacy of the fishing industry in Nigeria. However, the fishing being done by Boko Haram is to create confusion, continue the insurgency and to sustain their destruction of the Northeast and the country in general.”

Mr Adeniyi, who has been in the northeast theatre of war since 2015, reiterated that the ban on fishing is a standing policy that will be sustained until all Boko Haram activities are satisfactorily degraded.

“You will agree with me that Boko Haram would have by now stopped fishing if not for the people that would go there to buy from them. Even when I was the deputy theatre commander, our efforts were out to arrest illegal commerce in fishing. But all the same, some unscrupulous Nigerians will do everything possible to make money even at the expense of the lives and security of their fellow being.

“But on this day God is with us when our civil defence component of the Theatre intercepted the four vehicles who tried to escape but were effectively outsmarted. They brought them to the army after thorough investigation. The laid down procedure of burning them will be carried out.”

The official called on the members of the Nigerian Union of Road Transport Workers (NURTW) who “have been partnering with the military” to further advice their members not to take part in the illegal fishing business.

“The NURTW should not allow its members to be carrying fish for Boko Haram,” he said.

“Let us end this insurgency once and for all because Boko Haram without revenue is a finished Boko Haram. I want to say it sternly that it will not be allowed for anybody caught transporting fish for Boko Haram; both the fish and that mode of transportation will be destroyed.”

He said the burning of the four vehicles and the items they carried would have been done in the hinterlands where the vehicles were intercepted.

“But burning the four vehicles here in Maiduguri gives us a good opportunity to clearly tell other law-abiding citizens that if they release their hard-earned vehicles, even camel or donkey or canoe to be used for transporting fish for Boko Haram, you’re already part of the insurgency because you are aiding it and will be treated as an enemy of Nigeria.”