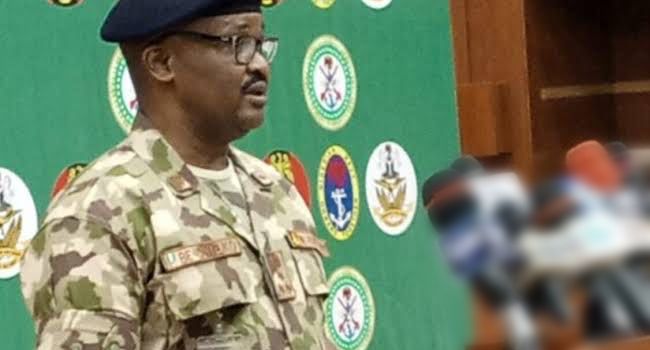 The Nigerian Military on Thursday, said its troops killed 55 bandits and injured several others who were on their way to attack the Nigerian Defence Academy (NDA) in Kaduna State.

At a press briefing by the Directorate of Defence Media Operations (DMO) on the operations of Armed Forces, held at the Defence Headquarters, the Army spokesman, Maj. Gen. Bernard Onyeuko, said under its Operation Thunder Strike/Whirl Punch, troops engaged 75 bandits in “a fierce battle around Labi general area along the Kaduna-Birnin Gwari road in south of Damari in Birnin Gwari Local Government Area of Kaduna State, leading to the death of 55 bandits.”

“The bandits/terrorists were heading towards the Nigerian Defence Academy (NDA), when our troops confronted them in a fierce battle that lasted for several hours. Many of them were also injured in the confrontation.

“The armed bandits numbering about 75 engaged ground troops in a fierce battle around Labi general area along the Kaduna-Birnin Gwari road.

“The bandits came under heavy airstrikes which aided the ground forces to effectively engage the bandits and neutralised them. Consequently, the operation resulted in the neutralisation of a total of 55 bandits,” the DMO said.