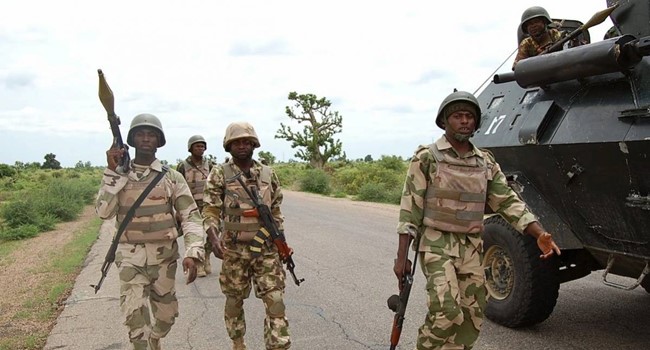 The Nigerian Army on Sunday said one of its soldiers attached to the 232 Battalion of 23 Armoured Brigade died while repelling a Boko Haram attack in Garkida, Gombi local government area of Adamawa State.

The Assistant Director of Army Public Relations, 23 Brigade, Major Haruna Sani, said in a statement that soldiers successfully defended the town which was besieged by the terrorists with about seven gun trucks and several motorcycles.

He claimed that the troops killed many of the insurgents while others left with gunshot wounds.

“The terrorists besieged the town in about seven gun trucks and a number of motorcycles, setting some buildings ablaze and causing unrest within the community.

“Instinctively, the gallant troops mobilized and intercepted the criminals’ advance and engaged the marauding criminals unleashing high volume of fire, leading to the elimination of several of the criminals while others withdrew in disarray, many of them with gunshot wounds as evident in the trails of blood along their withdrawal route.

“Regrettably, one gallant soldier paid the supreme price while another soldier was wounded in action. The wounded in action soldier has since been evacuated to a military medical facility and is positively responding to treatment.”

Independent sources had told journalists that the insurgents operated for about six hours, burning churches and buildings, while some residents, including three worshippers in one of the burnt churches were abducted.