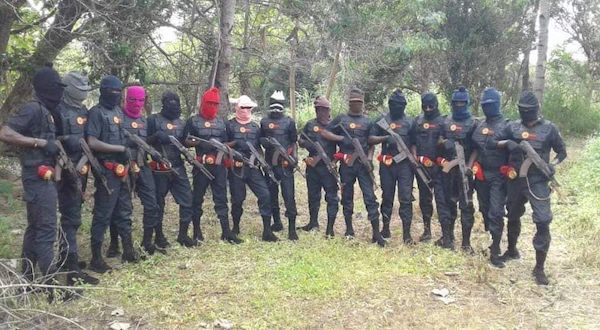 In the wake of the arrest of the leader of the Indigenous People of Biafra (IPOB) Nnamdi Kanu, some arrested members of the group have made startling revelations.

This came after a raid on the Abuja hideout of IPOB by operatives of the Force Intelligence Response Team (IRT) on Friday.

Ripples Nigeria gathered that some ESN members were caught donating money they said would be sent to Kanu, in order to fund the activities of the group in the Southeastern part of the country.

The arrest was made at a church premises in the Tungamaji area of Abuja where they were holding a meeting.

The police operatives recovered receipts and evidence of oaths they were made to swear to be loyal to their supreme leader, Nnamdi Kanu.

Some of the suspects who spoke to the media stated that they were hypnotized by Kanu’s messages on Radio Biafra.

According to them, they were convinced that the State of Biafra could be achieved through a referendum and they joined his group and started donating money to its cause.

The suspects, however, revealed their disappointment when the leadership of the ESN mandated the killing of security operatives in the South-East.

When interviewed, 49-year-old, Ebere Elemoha, a native of Ibitolu in Imo State, said: “It was one Mazi Ikone that made me join IPOB and I was told that there will be a referendum and I will also have the opportunity to vote.

“In the last four years the money we have made have been used in supporting the IPOB in the south east. When we joined the group, we were made to swear to an oath of allegiance to Mazi Nnamdi Kanu. I don’t know what is going on in the group.

“I was brainwashed by Nnamdi Kanu, now I am regretting my actions as a person. I am now being rehabilitated and I will make sure that I shut down IPOB in Abuja. It was Nnamdi Kanu that asked all the Zones to send men to east for IPOB training.

“The oath we took was that if we fail to follow instruction of Nnamdi Kanu, that we will die mysteriously.

“I was angry that the Imo state prison was broken and the policemen are being killed, killed by fighters we sponsored their training.”

Vincent Kalu, another suspect said: “I joined IPOB because they said the state of Biafra would be created through a referendum, but I do not know that I was being deceived.

“I didn’t support the killings in the Southeast but only just remained in the group as we were holding meetings.

“I also took an oath to be loyal to Mazi Nnamdi Kanu and if I fail to obey any of his commands that I will die mysteriously.”