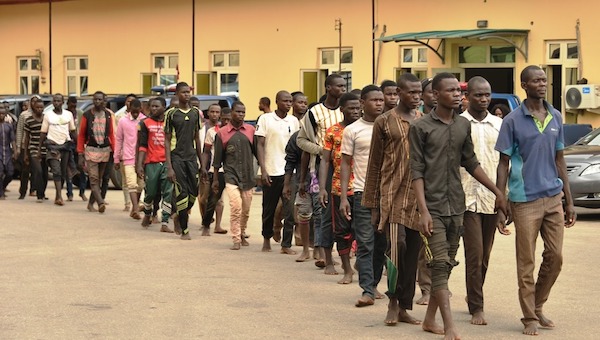 The 123 men from Jigawa State who were detained by the Lagos State Taskforce on Environmental Sanitation and Special Offences have sued the state government for unlawful detention and seizure of their motorcycles.

They are demanding that the state government and Commissioner of Police pay them the sum of N1bn for their unlawful treatment.

Other respondents include the chairman of the task force, Yinka Egbeyemi, as well as the Attorney-General of Lagos State.

Recall that the men were arrested by security operatives and detained over the weekend as they made their way into Lagos.

The men were intercepted along Moshalashi Road, Agege, alongside 48 motorcycles in a truck, from Jigawa State, but were later released

On Monday, however, Abdullahi Yakubu on behalf of himself and the other men filed a suit at the Federal High Court, Lagos demanding N1bn compensation from the state government for profiling and detaining them.

In the suit with number FHC/L/CS/1519 /19, the men are asking for the release of their motorcycles and other personal belongings allegedly still in the custody of security agents.

Yakubu and others are challenging the government for profiling them without any evidence of criminality, claiming that their detention violated their rights as enshrined in constitution of the Federal Republic of Nigeria.

The prayers by the men reads, “An order of this honourable court awarding the sum of N1bn payable by the respondents jointly and severally to the applicants as reparation.

“An order of this honourable court directing the respondents to tender unreserved public apology to the applicants.”