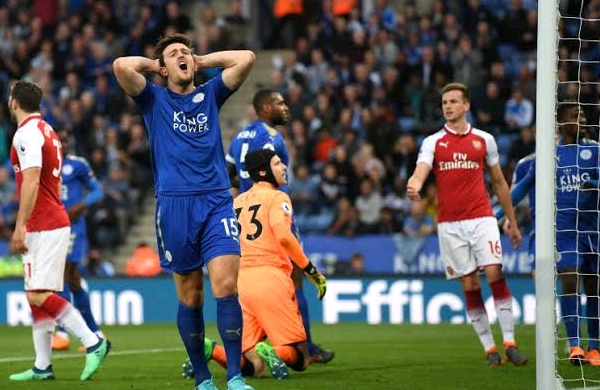 Arsenal may have all but lost hope of finishing in the top four of the English Premier League after capitulating to a 3-0 loss away to Leicester City at the King Power Stadium.

Unai Emery’s side were second best for the most part of the game and at one one stage in the first half, some match stats flashed up on the scoreboard which showed the Leicester had enjoyed 82 per cent of possession.

The efforts of Arsenal was even made harder when utility player Maitland-Niles’ was shown a red card after bagging an incredibly harsh yellow card minutes earlier as they battled on for the rest of the game with 10 men.

Liecester made their numerical advantage count in the 59th minute after Youri Tielemans broke Arsenal’s resistance with a goal as Bernd Leno did his best to keep the ball from hitting the back of his net.

Two late goals from Leicester city striker Jamie Vardy put the gloss on a 3-0 scoreline that was entirely justified for the home side leaving Arsenal’s top four hopes for another season in tatters.

The loss to the Foxes means the Gunners will now almost certainly have to win the Europa League in order to qualify and play in the Champions League next season.