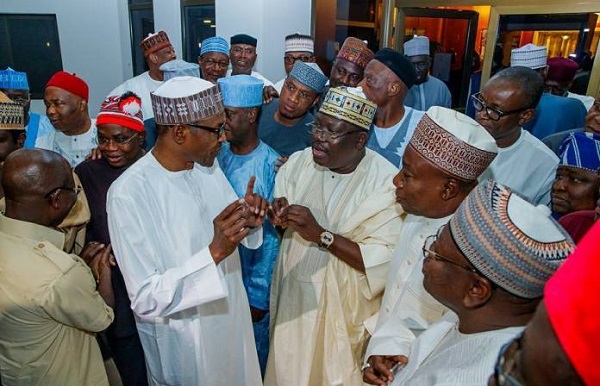 President Muhammadu Buhari on Monday night hosted State Governors and Senators-elect of the All Progressives Congress (APC) to a dinner at the new Banquet Hall of the Presidential Villa, Abuja.

According to reports, those in attendance include the National Chairman of the APC, Comrade Adams Oshiohmole; Secretary to the Government of the Federation, Boss Mustapha, and other presidential aides.

This dinner is coming as the race for the leadership in the 9th Assembly hots up.

Prominent among the senators-elect who have directly or indirectly indicated interest to contest for the seat of President of the Senate in the 9th National Assembly are Ahmed Lawan, Danjuma Goje and Ali Ndume all from Northeast zone of the country, as well as Abdullahi Adamu from the North Central zone.

It was gathered that the APC zoning formula for the election of a new Senate President for the 9th National Assembly may be part of the issues to be deliberated upon at the dinner.

Wike gave my running mate N200m to defect, but Rivers people won’t allow my mandate to be stolen- AAC’s Awara