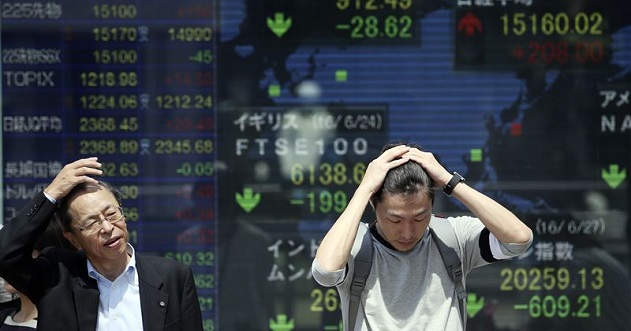 It is a major red day for Asian markets as they plunged Thursday morning following the worst session on Wall Street for months, in the aftermath of US President Donald Trump’s criticism of the Federal Reserve.

President Trump had said the Federal Reserve had “gone crazy” with plans for higher interest rates.

Tokyo, Hong Kong and Shanghai all plummeted around four percent in morning trade, as investors fretted about surging interest rates and the ongoing US-China trade war.

“All bets are off,” warned Stephen Innes, head of Asia-Pacific trading at OANDA, adding that markets were “fraught with peril.

“The US equity bloodbath is taking no prisoners in Asia as a sea of red greets investors at the open, as equity deleveraging and liquidation intensifies,” he said.

Taipei topped the drop with a six percent plunge while the Shenzhen Composite Index, which tracks stocks on China’s second exchange, was down 5.2 percent.

The steep drop in Asia came after Wednesday’s plunge in New York, with the Dow Jones dropping nearly 830 points — the biggest fall since February — after Trump’s latest criticism of the Federal Reserve.

“I think the Fed is making a mistake,” Trump told reporters as he arrived for a campaign rally ahead of the US mid-term elections.

President Trump has repeatedly touted Wall Street records as proof of the success of his economic programme. But he downplayed the first major drop in months, saying it was a “correction that we’ve been waiting for”.

Speaking with Fox News at Night on the telephone, the president reiterated his earlier criticism, saying: “The Fed is going loco and there’s no reason for them to do it and I’m not happy about it,” he added.

However, the International Monetary Fund chief, Christine Lagarde hit back on Thursday, defending rate hikes that she said were justified by fundamentals.

“It is clearly a necessary development for those economies that are showing much improved growth, inflation that is picking up… unemployment that is extremely low,” she told reporters in Bali where the Fund is meeting.