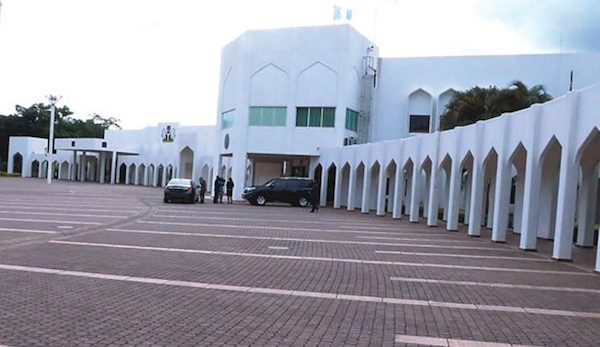 Aso Rock is the fortified seat of power in Abuja, Nigeria. Like the White House in Washington DC, 10 Downing Street in London or Elysée Palace in Paris, it is a fortress of safety for the President and other important power figures in Nigeria. The breathtaking edifice built by a foreign construction company could be said to be the safest place in Nigeria. General Ibrahim Babangida, the retired dictator that killed democracy in Nigeria following the June 12, 1993 presidential poll (won convincingly by the late Bashorun Abiola) had fled Dodan Barracks in Lagos in a jiffy for Aso Rock when coup-plotting, himself a professional in such treasonable military enterprise, was still a fanciful easy way of grabbing power by the jackboot.

After the late Major Gideon Okar and his martial gang missed snuffing life out of Gen. Babangida (IBB) but got his ADC (Col. UK Bello) instead IBB, terrified, had to relocate to Abuja. And since then a definite stop seemed to have been put to constant bloodbath through the toppling of constituted authorities, whether military or civilian, through the barrel of the gun.

Aso Rock has a myth woven around it. According to the prolific writer and former presidential aide, Reuben Abati, the powerful power Villa where the number one citizen resides had this mystic power to turn the life of a man around for the worst. Abati wrote an article detailing his years as ex-President Goodluck Jonathan’s Media and Publicity Assistant. He revealed spectacularly how Aso Rock could be a nightmare for the uninitiated, how the seat of power hosted marabouts and diabolical powers that ‘suck’ blood of the innocent!

Abati had argued that most people around the place of power always bathed in the morning with blood — goat blood, ram blood or whatever animal blood they could lay their hands on! He claimed that some staff were ‘ghosts’ walking upside down, head to the ground! He painted the picture of a strange place where strange things happened.

Many discerning Nigerians who read the opinion piece had concluded that demonic forces had taken over the seat of power. When Gen. Babangida moved in he was alleged to have buried countless live cows inside the Villa for his spiritual protection. The late Gen. Abacha was said to have imported seasoned marabouts from Niger Republic in order for him to become a successful killer and plunderer!

Former President Goodluck Jonathan used fasting and prayer sessions to conquer evil inside the Aso Villa. He survived many spiritual attacks but his wife was not that strong or lucky but she was lucky to have ‘escaped’ with her life intact! Maybe GEJ was seen as an executive ‘infidel’ occupying the seat of the Fulani Caliphate!

As an insider (having been there and seen it all) Abati was making sense. We remember how Patience Jonathan, our former First Lady, suffered bouts of strange ailments culminating in hospitalisation abroad and surgery upon surgery. She got herself and her life back only after her husband was defeated in the 2015 presidential election won by the incumbent President. Another former First Lady, Stella Obasanjo, died in a Spanish hospital when ‘Baba’ Obasanjo was residing in Aso Rock as omnipotent President.

It would be recalled that the former primitive dictator, Gen. Sani Abacha, under whose orders Abiola was liquidated, died suddenly inside Aso Rock after eating a poisoned apple reportedly presented to him by an imported prostitute from India! Before he died to the happiness of millions of Nigerians who bore the brunt of his barbaric tyranny Abacha had made name for himself as a professional coup-plotter like IBB and a big thief. Remember the ‘Abacha-loot’ and how it could be turned into a blockburster film by Nollywood?

Around the world, the presidential abode as the seat of power and national sover­eignty ought to be the fortress of the nation that must be im­pregnable security-wise, so any breach of se­curity particularly one perpetrated by outlaws at large sends a clear danger signal to the overall se­curity of the nation. Such security infraction, no matter how the presidential aides defended it or denied it is enough indication that no one and no place is a haven any longer in our embattled nation.

Earlier this week an embarrassing burglary incident was reported inside Aso Rock. Armed or unarmed dare-devil robbers had invaded at wee hours of the night the residences of two senior aides to President Muhammadu Buhari inside the precinct of the Presidential Villa, Abuja. The official residences of Prof. Ibrahim Gambari, the Chief of Staff to the President and the CoS’ Admin Officer, Abubakar Maikano, were raided.

According to credible reports online their houses were robbed and the robbers packed enough money and other valuable assets from both houses! The presidency through Mallam Garba Shehu had confirmed that there was indeed a robbery attempt at the official residence of the President’s Chief of Staff (CoS) around the presidential villa in Abuja tagging it “a foolish attempt” to burgle his home.

But before the presidential confirmation came the Personal Assistant on New Media to Buhari, Bashir Ahmad, had described the story as “fake news” accusing the online newspaper that broke the news as purveyor of fake news. We had waited for another notorious aide to Buhari, Lauretta Onochie, to say her own side of the story. Perhaps she would have said that anti-Buhari elements or the ‘wailing-wailers’ were at work to paint her principal black!

The Aso Rock burglary incident (whether it was real or fake or a failed attempt) represented the total collapse of the security structure in the country.

Now, with insecurity attaining the level never before seen or known in our national life Aso Rock seems to have been penetrated by undesirable elements. The general consensus is that President Muhammadu Buhari has failed to protect lives and properties of Nigerians hence the need for him to step aside or be forced to beat a hasty presidential retreat by the National Assembly.

It is gladdening however that voices from unfamiliar quarters in the north are being heard supporting the call for Buhari to resign or for the National Assembly to do the needful by impeaching him.

Whatever happens next in Aso Rock may not be our cup of tea! Worst things had happened there under the watch of the underwhelming President. The very worst could be said to be the gunfight involving the First Lady, Aisha, her children and aides against Sabiu ‘Tunde’ Yusuf, son of Buhari’s niece who also works as his Private Secretary.

It was a scary scene as guns were pulled out and shots released as a domestic power tussle snowballed into a ‘war’. No one was killed or injured while it lasted but we bore witness to how a favoured cabal member could master the art of fence-scaling as a survival instinct.

Perhaps post-Buharism we may request that Aso Rock be subjected to exorcism of a sort by prominent credible pastors or Imams. Now, with an executive herder residing there, one who sees nothing wrong in invoking the Mohammedian jihadist supremacy, we must pray for our seat of power to be ‘liberated’ from forces of darkness.

Beyond the burglary incident initially denied and later confirmed as a ‘foolish attempt’ there is something that boggles the mind: who burgled Gambari’s official residence? Was it an insider job or an external work of the outlaws? Or was the mastermind an insider, privy to the stockage of raw cash (in local and foreign denominations) in Gambari’s residence, who brought in professionals to do the job? How much money was stolen and how much material possessions were dispossessed?

These are the questions the Buharian propagandists (Shehu, Ahmad etc) should be answering rather than dismissing the burglary incident as insignificant.

Nigeria; a nation in dire need of patriots