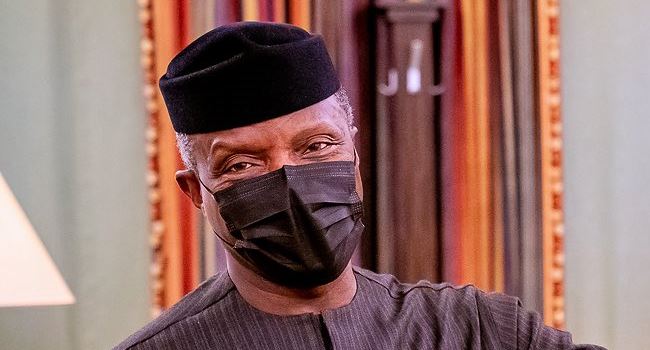 Last week, the Vice President, Professor Yemi Osinbajo, in Owerri, the Imo State capital, spoke on how Nigeria’s challenges could become a pathway to success.

His statement has since generated conversations around the Nigerian project and the prospects of its survivability.

This, and other interesting stories played out at the Aso Rock Villa past week.

On March 14, Vice President Osinbajo described the current challenges Nigeria facing as stepping stones to a greater future for the country.

Speaking at a special interdenominational thanksgiving service to mark the first anniversary of the administration of Imo State Governor, Hope Uzodinma, he said:
“Despite the challenges our nation faces, by the grace of God, we, the Nigerian people, are more than able to surmount them…The problems we see today are the stepping stones to our great future. We are, by the grace of God, mightier than our challenges.”

Beside coming from the place of lifting the spirit of Nigerians, Osinbajo’s talk calls to question the vexed issue of poor leadership in the country.

It causes a deep reflection on whether the leadership skills of our present crop of leaders are enough to navigate Nigeria out of the glaring fault lines manifest all over the country.

Indeed, the worsening crises, evident in rising unemployment, Boko Haram insurgency, banditry, farmer-herder conflicts and corruption, do not seem to give anyone cause to cheer.

If anything, the deeply ingrained culture of tardiness associated with the Buhari-led administration means that Osinbajo will have to do more than mouthing promises to getting the job done, especially in the management of the country’s diversities.

President Muhammadu Buhari, on March 18, admitted that despite his administration’s closure of land borders, arms and ammunition continued flowing illegally.

In a statement by his Special Assistant on Media and Publicity, Femi Adesina, the President was quoted as saying:
“We closed our land borders here for more than a year, but arms and ammunition continued to flow illegally. As far as Libya remains unstable, so will the problem remain. We have to cope with the problems of development, as we can’t play hop, step and jump. But we will eventually overcome those problems.”

Buhari’s statement speaks to the near hopeless state of managing the country’s borders and offers little succour beyond hoping that things would improve.

As pitiable as this sounds, Mr. President, rather than shop for excuses elsewhere, must take responsibility while appreciating that he was elected to protect the lives of Nigerians and not to regularly shop for excuses.

It is, therefore, pertinent to query what has become of Buhari’s role in the multilateral efforts aimed at checkmating the movement of illegal arms in the Sahel region.

Even more troubling are concerns that the challenges at the borders have remained so, largely because irresponsible officers at the border posts appear not to have been visited with sanctions as corruption reigns supreme.

“Let me also emphasise that this administration has zero tolerance for corruption and inefficient use of resources. In this regard, I hereby direct the Minister of Health to set up an accountability framework, to monitor the use of this fund and provide periodic performance reports to my office,” the president was quoted to have said.

At a time when claims of looting and re-looting of funds have become very rife, Buhari’s demand on Ehanire to show accountability in the use of the $890 million grant is welcome.

Perhaps, a first step in his demonstration of seriousness to check corruption in the management of global health grants, would be to order a thorough probe of how the Global Fund’s contribution of $51 million to fight the dreaded COVID-19 has been utilised so far.

Until then, critics may view his recent posturing as mere grandstanding.