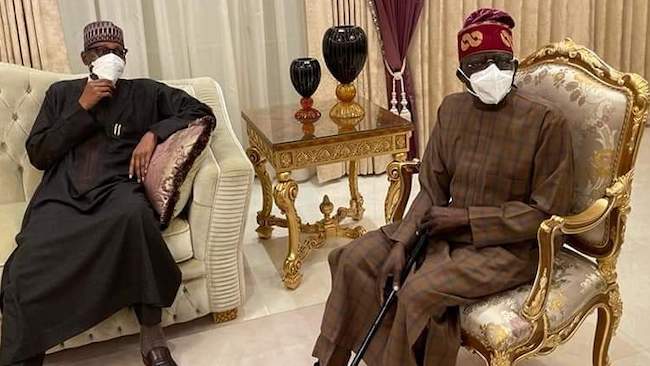 The Presidency, last week, washed its hands off insinuations that President Muhammadu Buhari is already supporting the alleged presidential ambition of the National Leader of the All Progressives Congress (APC), Asiwaju Ahmed Bola Tinubu.

This is coming on the heels of Buhari’s visit to the APC leader in his London residence.

Mr. President’s move was a dominant source of discourse even as we examine two other issues that drove national conversations.

That cat and mouse game

On August 13, the Presidency explained that President Buhari’s visit to Tinubu was not to endorse his perceived 2023 presidential ambition.

Buhari’s Special Adviser on Media and Publicity, Femi Adesina, made the clarification while speaking on a Channels Television programme.

He said: “The President still has two years, less three months in his tenure of office. So for him to start supporting somebody now will just be jumping the gun. And, you know that President Buhari will never do that.”

The denial, not unexpected, only confirms that conversations around the country’s leadership recruitment process has taken centre stage ahead of 2023.

It would not be the first time that the presidency is seeking to address a similar issue around the Buhari/Tinubu relationship.

Not long ago, Buhari was reported to have made loose remarks about how no one can stay in Lagos and determine the fate of the ruling party.

It is also evident that while Tinubu has not openly declared his plans to succeed Buhari, his proxies have since unleashed underground campaigns to market his presidential ambition.

The London meeting, therefore, may have revealed only little of what transpired. What is visible is that both men had retired in London to sort out their health challenges.

But beyond that, the London photo ops can aptly be described as a soothing effect on the rising negative perceptions about both leaders being at ‘war’.

Critics are, however, not completely sold to Adesina’s explanations. If anything, the unfolding scenario looks everything like a cat and mouse game between the camps of both heavy weights.

On August 14, the Presidency condemned last Saturday’s killing of no fewer than 33 travellers in Jos, the Plateau State capital.

“Make no mistake about it: in line with my commitment to protect all Nigerians, I have ordered our security agencies to fish out the perpetrators of this gruesome massacre of innocent travellers and bring them to justice,” Buhari said, in a statement by his spokesman, Garba Shehu.

The Jos killings is one too many. It lends credence to the claims by critics that Buhari has not exerted much effort in stemming the tide of bloodletting sweeping across the federation.

Needless to say that the latest killings in Jos is capable of raising inter-ethnic and religious tensions given early reactions by the Muslim Rights Concern (MURIC) which has alleged that a Christian militia was behind the killings.

While it is normal for Buhari to call for the arrest of the criminal elements, what is more important to Nigerians is to see that his directive is matched with the needed action capable of forestalling further attacks.

On August 13, the Vice President, Professor Yemi Osinbajo, called for a reform of the Nigerian Civil Service (NCS to ensure that civil servants own their own houses.

In a statement by his spokesman, Laolu Akande, the Vice President said: “I think that we should really do something that is bold, big and that will really make the difference in order to address some of the issues, especially that of accommodation for civil servants.”

While Osinbajo’s concern for civil servants may be considered lofty, a bigger challenge lies in the number of Nigerians who do not have shelter over their heads, and which has been estimated at 17 million, according to a research by BizWatch, making it the highest in Africa.

With the Minister of Works and Housing, Babatunde Raji Fashola, claiming there are no housing deficits in the country, it remains to be seen how policy inconsistencies will help Osinbajo achieve his pursuits for civil servants.