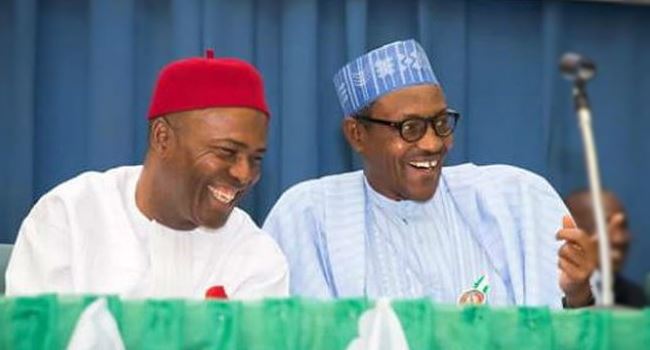 Many mouths were left agape in surprise when President Muhammadu Buhari was recently quoted to have said that citizens must resist the urge to travel abroad for medical treatment.

Could he have possibly uttered that when he, since coming into power in 2015, appears to have toured foreign lands for medical treatment more than any notable Nigerian has done?

Buhari’s many foreign forays had brought home the fact that most public hospitals in the country were death traps, owing to years of neglect and corruption by government officials.

So, did Buhari directly utter the statement that has become subject of national discourse? No, he did not. The Minister of Science and Technology, Ogbonnaya Onu did. He made the statement as a representative of Mr President at an event in Ebonyi State.

It was at the inauguration, and handover to management, of Alex Ekwueme Federal University Teaching Hospital, Abakaliki.

Onu had said at that event, “Nigerians have suffered so much going abroad for medical treatment. This is not good for us and it must stop because we can’t afford it again.”

The statement elicited different reactions from different quarters. Many viewed it as self-indicting and deceitful, while there were some who claimed Onu must have spoken for himself and not for Buhari.

But did Onu really speak for Buhari? As his representative at the event, it is supposed he did. After all, the president is yet to refute the statement.

If, indeed, Onu spoke Buhari’s mind, the question many now ask is, will Mr President, as the number one citizen of the country lead by example? Will the president be ready to now fulfil the promise he allegedly made to Nigerians prior to assuming office in 2015 that he would not seek medical attention abroad?

At the moment, it may be difficult to believe Onu spoke for Buhari except the president leads by example and stops his medical tourism in the United Kingdom (UK).

Until then, one can safely conclude that the Minister, Ogbonnaya Onu, made a careless slip on his principal, one that puts Buhari on the hot spot as he may be due for another of his regular medical check-ups shortly.

The other event that elicited great reactions last week was President Buhari’s New Year letter to Nigerians wherein he said he would be standing down in 2023 and not be available to vie for presidential elections in the future.

In the letter entitled, ‘A Letter from the President at New Year’ Buhari said, “I will be standing down in 2023 and will not be available in any future elections. But I am determined to help strengthen the electoral process both in Nigeria and across the region, where several ECOWAS members go to the polls this year.”

Going by the 1999 constitution, Buhari has no other option left than finish his second term of four years in 2023 and pack all his belongings out of the nation’s seat of power.

The repeated reference to not being keen on a third term looks to have most citizens edgy, rather than reassure them as the law completely shuts the door against Buhari in 2023. It is clear that the mood of the nation would not tolerate any attempt to breach aspects of its grand norm.

Again, Nigeria mourned last week as the presidency spoke out on the recent killing of some citizens which has become almost a regular feature. It said, “there is no justification for killing innocent people,” just shortly gruesome murders were reported in Kogi State.

Those who received the message last week were the people of Tawari community of Kogi Local Government Area of Kogi State, where suspected herdsmen killed over 20 innocent citizens.

Like always, President Buhari, in a statement by his Senior Special Assistant on Media and Publicity, Malam Garba Shehu said, “There is no excuse or justification for killing innocent people by anybody or group, and for whatever motive. The killings and revenge killings will only aggravate the cycle of violence, creating neither safety nor security for any side.

“People should avoid taking the law into their own hands because doing so could make a bad situation worse and undermine the government’s efforts to tackle security challenges.”

These pleas seem to fall on deaf ears which remains a challenge for the Buhari administration. Sadly, the murderous gang appears evasive only to return and cause more mayhem and embarrassment to the government. Whether the condolence messages would cease is a matter of conjecture. The hard reality is that until, and unless, the perpetrators are brought to justice, the government may continue to dish out condolence messages at regular intervals.