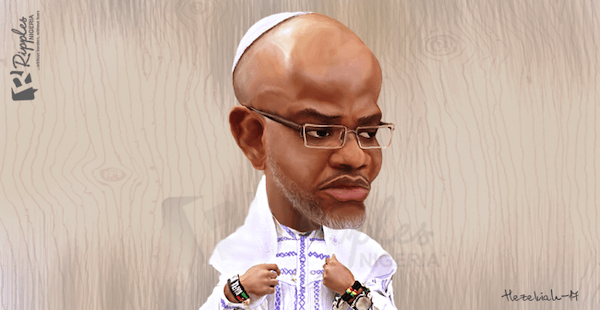 Shouts of a ‘fake Buhari’ rent the air again last week. That was in Tokyo, Japan.

It started off as a whisper but gained momentum when news filtered in that leader of IPOB, Nnamdi Kanu, had ordered the attack and arrest of President Muhammadu Buhari by members of the secessionist movement.

Kanu had, upon learning of Buhari’s plans to travel to Japan for the Seventh Tokyo International Conference on African Development (TICAD7), which held in the City of Yokohama, ordered his group in the host nation to attack, disgrace and arrest the Nigerian President.

“The formidable IPOB family in Japan is hereby placed on direct order to ensure the impostor Jubril Al-Sudani, masquerading as the late dictator Muhammadu Buhari is arrested and handed over to the authorities when he sets foot on Japanese soil.

“He is not only a fake president; he is wanted for mass murder and crimes against humanity for his role in previous and ongoing genocide in Biafraland.

“Under Japanese law, an impostor is a common criminal and subject to citizen’s arrest. International diplomatic protocol as it relates to visiting heads of state is not applicable in this instance …whoever Abba Kyari is sending to Japan is not the real Buhari. We must make sure he is apprehended and handed over to the police in Japan.

“Any legal fall-out emanating from any confrontation will end up in a Japanese court, where we will be able to establish before the world that Jubril is indeed a fake Buhari,” Kanu had reeled out while issuing the order.

The Kanu threat eventually turned a hoax, indeed, a propaganda taken to a ridiculous level. Buhari did not only make a success of the trip but returned into the warm embrace of Nigeria.

If anything, kanu and his followers, in Tokyo, appeared like weather-beaten chicken, providing comic relief for many watchers who considered them an unwanted distraction in the midst of serious talks for Africa’s development.

While Kanu may have been taken his members on a foolish ride, not a few Nigerians saw through his foolishness. His conduct was disappointing enough to cause a depletion within the community of fans who ascribed some sense and importance to the Biafran struggle. In what appears as taking idiocy to a greater height, the President of Nigeria was declared missing by Kanu and his funny IPOB group.

How not to take a people for fools

Perhaps, what is most disheartening is the childish propaganda embarked upon by Kanu and his IPOB group. So juvenile was the claim that Buhari was no where in Japan that the group stirred rumours of photoshopped pictures.

The worst of the claims was the group vowing that they won’t allow Buhari out of Japan having ‘encircled’ his hotel. “Even if they try to smuggle ‘Jubril-Buhari’ out by hiding him in a diplomatic bag, we shall get hold of him,” Kanu had boasted.

Buhari has since returned to Nigeria, and Nnamdi Kanu and his group have remained silent, appearing to justify the claims in certain quarters that they are mere noisemakers and rabble-rousers.

Indeed, IPOB may have finally shown itself as a group not to be taken seriously any longer. While it may have good reasons to agitate against the situation of things in Nigeria, like many other groups, including those agitating silently, what is now apparent is that there is more to IPOB’s posturing than meets the eyes.

The leaders of the South-East need to urgently evolve strategies to curtail the nuisance that Kanu-led IPOB had become.

During the week gone by, the Economic and Financial Crimes Commission (EFCC) attempted to polish off the image of Abba Kyari, Buhari’s Chief of Staff. It had been rumoured that he was behind the probe of the Head of Service of the Federation, Winifred Oyo-Ita.

According to EFCC, the claim was false. Like was done during the Abdulrasheed Maina saga, when Oyo-Ita was said to have incurred Kyari’s wrath for letting out to the public the secret reinstatement of the fugitive, a photo showing Kyari and Oyo-Ita beaming with smiles was circulated by the Presidency to make Nigerians believe all is well in Aso Rock.

Well, madam HoS should know better. Our instincts suggest her travails may not be over yet, the smiles not withstanding.

The hammer on Moghalu

The week in review also saw the presidency hammer come down heavily on Kingsley Moghalu, a former deputy governor of the Central Bank of Nigeria (CBN) and the presidential candidate of Young Progressive Party (YPP) at the 2019 general elections. He got enough dose of the fury of the Presidency for daring to question why Buhari, the president of the country rated as the largest economy in Africa was snubbed at the 45th G-7 summit.

“Kingsley Moghalu is either ignorant or playing petty politics. The non-invitation of President Buhari to witness the G7 meeting this year is not a snub. Neither does it diminish the status of Nigeria as the biggest economy on the continent,” Buhari’s senior special assistant on media and publicity, Garba Shehu, said. He added that Moghalu “makes ignorance fashionable.”

Moghalu should expect to be hit even harder because he has been identified as one of the strongest voices technically challenging Buhari’s policies and governance style. In Aso Rock, the ‘Big Brother’, Buhari Media Organisation watches every dissenting voice.