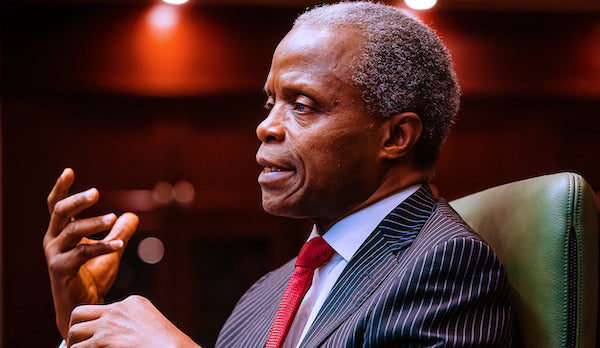 This, and two other stories, were among the most talked about by Nigerians in relation to the seat of power, Aso Rock, past week.

On May 17, Vice President Yemi Osinbajo distanced himself from a website – supportosinbajo.ng – campaigning and mobilising support for his supposed Presidential ambition ahead of the 2023 election.

A statement by his media aide, Akande, read: “The Office of the Vice President is not in any way connected to this website or the group behind it and considers such an enterprise an unnecessary distraction.
“Prof. Osinbajo has not declared any interest whatsoever in the 2023 election, but he is rather focused on working in his capacity as Vice President in the current administration to address all the compelling issues in the country and concerns of Nigerians, including finding effective and lasting solutions to the security challenges.”

It is not uncommon in political games to find competing elements fly the kite and watch opponents fall for the bait.

It could be recalled that in April, the former governor of Lagos State, and acclaimed leader of the All Progressives Congress (APC), Chief Bola Tinubu, denied having any interest in the presidency after customized bags of rice bearing his picture, and his title – Jagaban – were distributed to Kano residents.

Fickle attempts have been made till date to make Tinubu appear as if it is, indeed, not his personal desires to run for the presidency but those of his acolytes.

Osinbajo may be riding on a similar strategy, though it has been argued by some that the website was a product of political mischief, designed to cause unnecessary distraction, and problems for the Vice President.

It is not impossible, however, that Osinbajo may be subtly testing the waters to see the reaction of Nigerians in case he decides to take a shot at the number one office in the land.

While it is within the right of Osinbajo to contest for the Presidency, Nigerians can only hold on to time to unmask his actual intention, and that of other politicians suspected to nurse the interest of succeeding President Buhari come 2023.

President Buhari, on May 19, reiterated his administration’s resolve to organize free and fair election, including the forthcoming 2023 General Election.

Speaking at an interactive session with some Nigerians in Paris, France, he assured that his administration’s commitment to free and fair elections will be followed through in every future election.

“Free and fair election is a great concern. In the last elections, our party lost in some elections and it reflects our position of non-interference. Normally those in power will win by hook or by crook. We believe in free and fair elections. I have respect for Nigerians to choose their leaders.”

Buhari’s verbal commitment to free and fair election is noted but many may fault his resolve as holding no water. This is linked primarily to his blunt refusal to sign the Electoral Act (Amendment) Billl, 2018 passed by the National Assembly.

In refusing to assent to the bill, he had said: “Any real or apparent change to the rules this close to the (2019) election may provide an opportunity for disruption and confusion in respect of which law governs the electoral process.”

However, bearing in mind the associated benefits of the bill on the conduct of elections in Nigeria, Buhari’s refusal to assent to it even after the 2019 election gives him away as insincere.

No wonder then that the country is still miles away from instituting a culture of credible polls as vote buying, manipulations of electoral results at the courts, militarisation of the electoral polling units, rigging, hijacking of ballot boxes remain common place.

Mr President must walk the talk.

On May 18, President Buhari wrote to the National Assembly to approve a loan request of $6 billion. The President’s request is a component of an external borrowing plan contained in the 2021 budget.

“I wish to bring to the attention of the President of the Senate that the plan is to raise the sum of USD 6.183 billion from a combination of sources, namely multilateral and bilateral tenders as well as from the International Capital Market (ICM) through the issuance of Eurobonds,” Buhari said in a letter to the National Assembly.

Many have queried the excessive borrowing of the last six years, and opined that it is taking a toll on Nigeria’s economy, especially with its high debt servicing components.

While it is not a ‘sin’ to borrow to fund critical infrastructural projects in transportation, education, health, among others, what becomes a thing of concern for Nigerians is the genuine application of these loans to deserving sectors in the face of a growing temptation by public officials to steal from the public purse and or misapply the loans for political gains.

More importantly, questions will continue to be asked of how safe the loans would be as the country’s revenue to GDP ratio nosedive while debt to GDP stay in a safe zone.