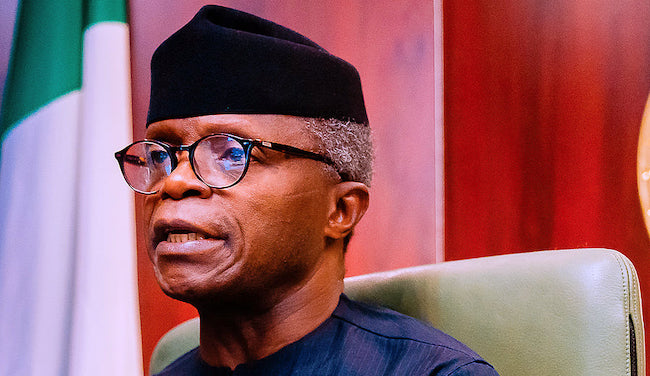 Vice President Professor Yemi Osinbajo, last week, admitted that the administration was struggling with fulfilling its promise of lifting 100 million Nigerians out of poverty in 10 years.

He, however, proffered a solution to the touchy issue which appeared lacking in substance.

This, and two other stories, were among the most talked about by Nigerians in relation to the seat of power, Aso Rock, past week.

On July 2, Vice President Osinbajo asserted that the Federal Government will employ a common-sense strategy to lift 100 million Nigerians out of poverty.

Speaking in Abuja when he chaired the inaugural meeting of a committee of the National Poverty Reduction with Growth Strategy (NPRGS), he said, among others:
“I think we really need to take a deep dive because governments have made several efforts at poverty alleviation but generally speaking, they have not yielded the sort of results they should yield.
“And I think it is because there is a lot of focus on documentation and paperwork and very few commonsense approaches.”

Osinbajo’s call for a common sense strategy (whatever that means) in lifting 100 million Nigerians out of poverty sends strong signals that the economic models of the NPRGS appear unproductive, if not fruitless.

Indeed, Osinbajo’s confession confirms long-held doubts that the government’s poverty alleviation programs were not sustainable, and may have become conduits for financial leakages.

If anything, many years down the line, Nigeria has continued to occupy the disgraceful position of world’s poverty capital.

While the Vice President pontificates, posers that require answers include, among others:
1, Are Nigerians to expect outright jettisoning of the implementation of the economic plans of the NPRGS?
2, Or, should they anticipate an injection of new economic strategies to the NPRGS plans based on current realities?

Bearing in mind that the Buhari administration would elapse in less than 24 months, coupled with the uncertainty of a new administration continuing with the NPRGS programme, it would seem that the administration is basically considering a deserved rest to rework its poor performing strategies.

The Presidency, on June 6, cautioned that the Federal Government will not sacrifice the unity of the country on the altar of the fundamental rights of individuals.

Coming on the heels of the re-arrest and extradition of the leader of the secessionist group, Indigenous People of Biafra (IPOB), Nnamdi Kanu, and the ‘midnight raid’ of the Ibadan residence of the chief promoter of Yoruba Nation, Sunday Igboho, the government, through Mallam Garba Shehu, said, “The successes of our security agencies must be commended as they have demonstrated significant deftness, guile and secrecy in carrying out their missions.”

The Buhari administration’s avowed respect for the right of citizens to freely express their views, as a fundamental aspect of democracy, appears to be at variance with its junta style of clamping down on voices of dissent.

Till today, the place and how Kanu was re-arrested are still a subject of wild guesses; with allegations rife that he may have been kidnapped and tortured gaining momentum.

Besides, the nocturnal invasion of Igboho’s home by the DSS, which saw to the killing and destruction of property, does not reflect what should be expected in a democracy.

The Presidency must admit that its widely perceived failure in managing the country’s diversity and building better stakeholder mentality is essentially the trigger for all the resentments and rising tension in the land.

While the Presidency reserves the right to ensure order and unity of the country, it must strive to address the root causes of perceived injustice and inequity.

Needless to say that dialogue remains a better option than war.

On July 10, President Buhari expressly condemned the spate of killings in Zamfara and Kaduna States by bandits, and urged the military to respond to the worrying situation in a language that the bandits understand.

A statement by his spokesman, Garba Shehu, noted “…the nation’s sorrow over the loss of lives, urging security agencies to do everything possible to prevent the recurrence of attacks with impunity.”

Buhari’s continuous condemnation of the senseless killings by bandits in Northern States has become a source of irritation to most Nigerians. This is as his continuous expressions of grief, sorrow and regret over the gruesome killings without commensurate action to stem the tide have now become an irritant.

Indeed, one thing is certain, until the people begin to see Mr. President as matching his words with action, his order to the military to crush the bandits would continue to sound like a broken record in the ears of well-meaning Nigerians.