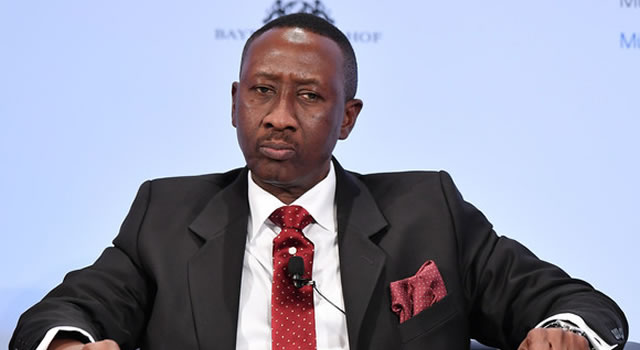 President Muhammadu Buhari’s Senior Special Adviser on Media and Publicity, Garba Shehu, was all out defending the Presidency last week over dusts raised by Babagana Monguno, the National Security Adviser (NSA), that there was something fishy about Nigeria’s spend on arms procurement.

Monguno, in an interview, had reportedly claimed that the country’s former Service Chiefs had mismanaged the several billions of Naira put in their care for the purchase of arms meant for the prosecution of the war against insurgency.

This, and other engaging stories from Aso Rock Villa generated intense attention nationally in the past week.

On March 12, Shehu said no fund was missing under the watch of the immediate past Service Chiefs.

Speaking on Channels Television’s Politics Today hours after Monguno, in an interview with BBC Hausa, allegedly said $1bn meant for the purchase of arms to strengthen the country’s anti-terrorism war had been mismanaged under the leadership of the Ex-Service Chiefs, Shehu said: “About the $1bn taken from the Excess Crude Account with the consent of State Governors used for military procurements, I want to assure you that nothing of that money is missing.”

“At no point did the NSA say that money has been misappropriated and that no arms is seen. They have not been delivered, that is correct; these are things you don’t get off the shelves,” he added.

Shehu’s defence of the Buhari presidency is no surprise as he is expected, at all times, to shield the administration from any negative report capable of rubbishing its image and goodwill.

The effort this time may amount to little as Monguno’s now recanted claims had been subject of public debate for long. Indeed, before now, there had been calls for a thorough investigation of all dealings of the former Service Chiefs.

This explains why eyebrows were raised when President Buhari made them ambassadors, with many critics arguing that they may have hoodwinked him into shielding them from any probe.

While Shehu battles hard to launder the image of the presidency in what is gradually being seen as a scam, it would take more than denials to shut down Nigerians from demanding an investigation of the former Service Chiefs.

This is especially so as the circumstances of the ambassadorial appointments and the deteriorating security situation demand thorough accountability and transparency in the management of every penny earned by the Nigerian state.

The First Lady, Aisha Buhari, on March 8, called for an end to the abduction of women and schoolgirls in her goodwill message to Nigerian women on International Women’s Day.

In the message posted on her Twitter handle, @Aishambuhari, she had said, among other things: “Away from COVID-19, women and girls in Nigeria have continued to suffer abductions both in the hands of insurgents and bandits.

“As a mother, I share the sorrow and agony of the victims and their families. I am also not unaware of the impact that these abductions could have in reverting many successes we have hitherto achieved, especially in terms of girl-child education and early marriages.”

Aisha’s concerns reflect the sorrows and disappointments faced by mothers of kidnapped victims across the Northern States.

Beyond the commentaries, however, her contributions from wherever she may be hibernating raises issues about her whereabouts which had been a subject of street talks as the country under the care of her husband had become a relic of its old self.

Therefore, the symbolic gestures from her might not do as the public expects high level advocacy to champion the cause of women and children given the constant abductions of this vulnerable group of Nigerians.

On March 12, the Vice President, Yemi Osinbajo, called on Nigeria’s political and ethno-religious leaders to enlighten the populace about the need to live together in unity in the communities.

“Unity is not just a slogan or even merely a good idea. It has manifest expression in our communities where Nigerians from diverse backgrounds are co-mingling, trading, partnering, inter-marrying and blending in various ways,” he said while delivering a convocation lecture at the Sokoto State University.

He added: “We live in a complex web of multi-layered social, cultural, economic and political synergies playing out in every sector of our individual and national life. This is why we must understand that even though managing diversity can be politically and administratively onerous, diversity itself is an economic strength and harnessing it properly is hugely rewarding.”

Osinbajo’s message could not have come at a better time when Nigeria is badly divided across ethnic and regional lines.

While he preaches unity, however, the concern of many Nigerians hinges on the deepening fault lines between and among its citizens, and how these are widening as a result of the ruling party’s failure to check lopsided appointments, as well as perceived marginalization by some groups.

Osinbajo’s preachments can only work wonders if the right things are done to cement broken ties and build a stronger sense of belonging among its federating units.