ASO ROCK WATCH: The cabal rumours that won’t go away. 2 other things that caught our attention | Ripples Nigeria

Home » Politics » ASO ROCK WATCH: The cabal rumours that won’t go away. 2 other things that caught our attention 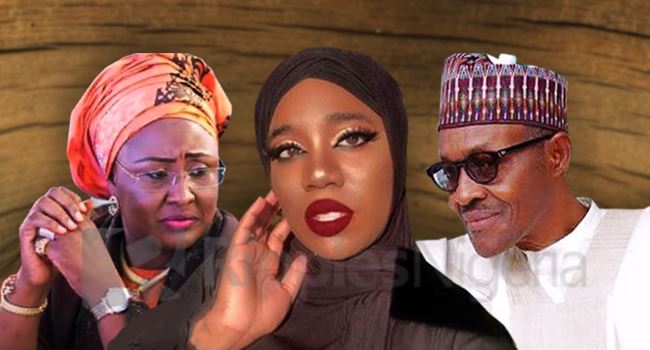 Expectedly, Aso rock, home and office to the Buharis, was a beehive of activities last week.

For a first time visitor, the ambience at the seat of power makes it one of the most interesting places to be. It exudes peace and a certain calmness that lures one into believing that there is never going to be trouble anywhere within.

But nothing could be further from the truth. Beyond the seeming calmness is a culture of intrigues. There is never a dull moment, and last week was not an exception.

This time, what dominated discourse was the embarrassing video in which a certain lady was caught screaming and ranting. It turned out to be the President’s wife!

Aisha has since apologised to her children, immediate family members and Nigerians over the embarrassment that the online video caused them. In what looked like an attempt to placate Aisha, President Buhari, two days after the domestic issue went viral, appointed six new aides for Aisha.

Not only Aisha was placated. Nigerians, who felt disappointed over the video, seemed to have also forgotten about the event. After all, Aisha, who they were fighting for had chosen to let go.

Though the matter seems to have been rested, what remains an open wound is the question of whether there are unseen hands pulling the President in different directions.

One of the stories that trailed Buhari’s first term and which has continued, even in his second term, remains the suspicion that a certain cabal, and not him (Buhari), had been in charge of the affairs of the country.

Aisha had more than once cried out over the activities of the so- called cabal she alleged had hijacked her husband’s administration. Among persons often fingered by Nigerians as part of the unseen hands had been Mamman Daura. Thus, since the emergence of the embarrassing video, not a few had thought deeply on the reality of a cabal calling the shots, instead of Buhari.

Indeed, many continue to wonder what a supposedly ‘jobless’ Mamman Daura and his family members could be doing in Aso Rock, to the point that the daughter, Fatima, could trouble the First Lady.

Another issue the embarrassing video threw up is the question of Buhari’s ability to manage his home front. While some Nigerians only expressed these fears in hushed tones, many others trolled Buhari on social media.

A group, Human Rights Writers Association of Nigeria (HURIWA) even advised Buhari to take a leave of absence to enable him to put his house in order.

“Mr. President must be aware that the nation sleepwalked into the global poverty capital under his watch only last year overthrowing India which has a population of over a billion people just as Nigeria with a statistically fraudulent and disputed population of 200 million already has over 92 million citizens who are absolutely poor. Insecurity and instability are twin social evils that have threatened our existence and millions of Nigerians sleep with one eye open, Nigeria can’t afford to have a President whose attention is divided by unnecessary domestic squabbles of the women members of the immediate and extended families,” the group had cautioned.

While Buhari’s unrepentant critic, Femi Fani-Kayode, believed Mr President failed to protect his wife and advised him to turn a new leaf, the opposition Peoples Democratic Party (PDP), opined that the embarrassing video was proof of his alleged failure both at his home and in the leadership of the nation.

That solidarity match for Aisha

How could anyone have missed out on the solidarity visit to Aisha? It was led by the wife of Vice President Yemi Osinbajo, who was joined by governors wives, senate president’s wife, other senators’ wives, speaker’s wife and wives of members’ of the House of Representatives.

Read also: ASO ROCK WATCH: The cabal rumours that won’t go away. 2 other things that caught our attention

After Aisha’s prolonged stay abroad and all the issues and rumours her absence created, including that of her husband allegedly fixing a second wife, there may not have been a better time for the women to rally round Her Excellency and the nation’s First Lady.

Like a commentator said, “happy that she has the women folk and majority of the nations by her side, the visit may have pacified Aisha in no small measure.”

Buhari’s last week approval of measures aimed at instilling financial discipline and prudence, particularly in the area of official travels among his ministers and top government officials, caught our fancy, and those of others.

A rare occurrence, he was applauded for slashing the estacode of officials of government and directing that they must now submit their yearly travel plans for statutory meetings and engagements to the Office of the Secretary to the Government of the Federation and/or the Office of the Head of Civil Service of the Federation for express clearance within the first quarter of the fiscal year, before implementation.

The Buhari initiative has since lured citizens into asking for more in the area of cutting costs of governance. For instance, questions are being asked about his earlier 2015 promise to cut the size of the presidential fleet and the large number of entourage always accompanying him to his numerous trips abroad.

Will Buhari deliver more? We look forward to another eventful week.