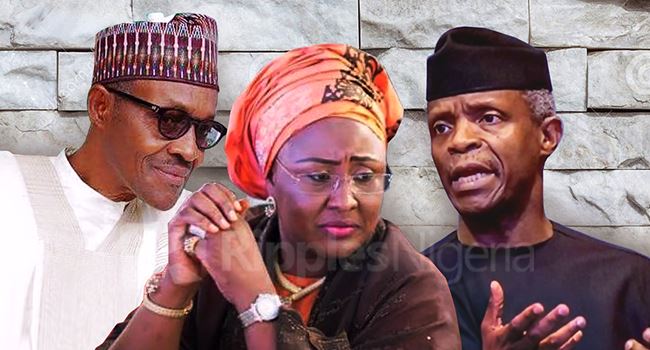 Like always, events around President Muhammadu Buhari and other members of the Aso Rock team, last week, got Nigerians talking.

The social media and other media platforms were saturated. Nigerians were either reading or listening to reactions by others.

Top on the list of these events was the question posed to Buhari at the United Nations General Assembly (UNGA74) in New York, United States.

During an interactive session at the event, President Buhari was asked to talk about his plans for the future of Nigeria’s young population.

Rather than respond to the question directed at him, he picked a script and read out a prepared speech on climate change.

It was, indeed, an embarrassing moment. And, while many of Buhari’s supporters kept silent, not knowing how to defend the embarrassment, his critics saw the event as something to use to maintain their position that the president of Africa’s most populous nation was ‘incompetent’ and sometimes did not ‘comprehend’ simple questions.

However, as embarrassing as Buhari’s response may appear, some think he made some sense by avoiding the question on Nigerian youths.

The last time Buhari commented on Nigerian youths was in April 2018, during a panel appearance with world leaders at the Commonwealth Business Forum in London, United Kingdom. He had at that event inferred that Nigerian youths were lazy. The barrage of attacks the President received over that comment, some have come to argue, could have informed the president’s approach at UNGA74.

After all, “Once beaten, twice shy” they say.

One ridicule too many

No other but Buhari’s media aides, Tolu Ogunlesi and Bashir Ahmad, were said to have shared the four-minute video, where their principal gave a different answer to a question from a prepared speech.

@queen_munah, “Mr Tolu, did you listen to the question that led to your president response which you are shamelessly glorifying? This is the President of a country in 2019 who can’t think for himself and you blindly promoted this shame as per? This is a disaster!!!”

@OgbeniDipo, “I don’t know what is going on in that Buhari’s UN video but no one should be reading a speech from a paper or iPad or whatever on a panel discussion. You should speak from your head and engage the audience. That is if it is a panel discussion.”

@AchileEbikwo, “I think Tolu Ogunlesi and Ahmad shouldn’t keep their jobs. The PR was poorly done and their principal was exposed to public ridicule. Above all, it was a total embarrassment for all Nigerians.”

Ogunlesi and Ahmad should have known better. Their action was certainly not how to expose one’s principal to ridicule. However, a fire had been lit and there was an urgent need to fight it.

The Presidency team claimed in a statement that Nigerians who attacked Buhari for the ‘embarrassing response’ got “things horribly wrong”.

According to the Presidency, Buhari chose to deliver prepared remarks in order not to deviate from addressing the theme of the event; “Towards a Resilient Future: Announcement of plans to mainstream climate risk in decision making.” His handlers insisted that his response with a prepared speech was “wholly in alignment with the theme”.

Some critics think the Presidency should have saved itself the stress and pains of trying to explain Buhari’s performance because, after five years in power, citizens sure understood the capacity of their president.

During the preceding week, Nigerians were rattled at the directives of President Buhari which tended to castrate the powers of his second-in-command, Vice President Yemi Osinbajo.

As citizens struggled to unravel what must have warranted the development, a former deputy national publicity secretary of the ruling All Progressives Congress (APC), Timi Frank, came up with aN90 billion fraud claim against Osinbajo.

Frank had accused Osinbajo of collecting the money from the Federal Inland Revenue Service (FIRS). He said the money was meant for 2019 general elections campaigns but that the vice president mismanaged it.

The mismanagement of the money, Frank alleged was the reason behind Osinbajo p’s travails.

While Osinbajo threatened to waive his immunity to enable him to sue and be sued over the matter, Frank insisted the Redeemed Christian Church of God pastor was as guilty as ‘charged’ and dared him to sue him. The report of the Christian Association of Nigeria (CAN) vowing to defend their own, helped the Osinbajo saga to engage Nigerians in no small measure.

A lawyer has since made things easier for Osinbajo, reminding him that he needed not to waive his immunity to be probed in a criminal allegation.

“I wish to state that the immunity under Section 308 of the Constitution does not extend to a criminal investigation by law enforcement agencies. This was the position taken by the Supreme Court in 2002 in the celebrated case of Chief Gani Fawehinmi v. Inspector General of Police.

“Provided the investigation does not result in the arrest or detention of the Vice President or compelling his appearance, he can be investigated,” the lawyer, Inibehe Effiong said.

Why some Nigerians may still be waiting for Osinbajo to execute his intentions, not a few believe that the matter in the coming days, will be forgotten like similar ones before it.

Controversies over the First Lady, Aisha Buhari’s supposed abandonment of the Villa was another topic that dominated discourse last week.

She was said to have, in August, jetted out of Saudi Arabia, where she went for religious pilgrimage in the company of her husband, to London.

This insinuation had since been punctured by the Presidency. According to the director of information to the First Lady, Mr Suleiman Haruna, the speculations are false. Haruna said  that as a free Nigeria Aisha had absolute freedom to move round to anywhere and for however long she wanted.

All said, last week events around the Nigeria’s seat of power did well to engage citizens and temporarily took their minds off the ugly realities of a people living in a country ranked as the capital of the world poorest humans.