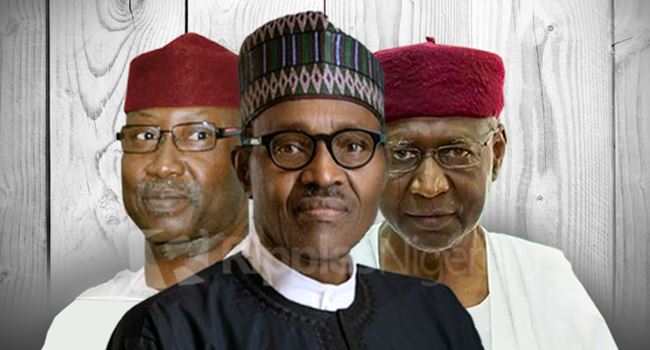 The supposition that President Muhammadu Buhari’s government has been run by a cabal got heightened last week with the president’s order to his new ministers.

Many already are familiar with the order which last week kept social media and other media platforms busy with myriad reactions.

But for the sake of those who may have forgotten, the order is recaptured below and it reads:

“(My new ministers) in terms of coordinating communication, kindly ensure that all submissions for my attention or meeting requests be channelled through the Chief of Staff (Abba Kyari), while all Federal Executive Council matters are coordinated through the Secretary to the Government of the Federation (SGF), Boss Mustapha, to speed up the process of decision-making.”

The order was not a slip of the tongue because Buhari had a day earlier, when the ministers rounded up a retreat preceding their inauguration, dished out the same order to them. He only re-emphasised it on Wednesday, August 21, when the ministers were sworn-in into office.

The president is supposed to have reiterated the order to ensure it sinks into the heads of the new ministers.

The angry reactions that followed the order were not unexpected; especially as the allegation of a cabal running Buhari’s government has remained an issue of concern to citizens.

Even the president’s wife, Aisha Buhari, who initially never wanted to be addressed as the First Lady, but later repented and asked that she be addressed as one, had in 2016 said in an interview, that certain individuals who never contributed to her husband’s 2015 electoral victory, had taken over his government and were deciding who gets what.

She had also in 2018, accused two men in her husband’s administration of hijacking his government.

Though she did not mention any name, not a few Nigerians fingered Kyari as one of the two men Mrs Buhari was referring to.

Who is afraid of Kyari, Mustapha?

Many Nigerians presumably had wished Kyari was never reappointed Buhari’s Chief of Staff. APC stakeholders had even on June 24, 2019, protested in Abuja, calling on the former military dictator to give Kyari the boot. Those in the opposition had also felt the same way.

However, the man who has the knife and carrot in different hands, and who cuts it how he pleases, at the end stuck with his ‘faithful’ COS.

He also stuck with his SGF despite the clamour from the people of South-East, asking Buhari to use the position to compensate the region for losing out in all major governance position in the country.

After Kyari was re-appointed as COS, a Twitter user, @Obelezealiora, had said, “As expected. Congratulations to the appointees for surviving the infighting. Sorry to Nigerians, myself included: our misfortune continues.”

Another user, @OdanapgunG, had tweeted, “This man (Buhari) can never be swayed to do things he doesn’t believe in. Upon all the protest, he went ahead to reappoint Abba Kyari.”

The almighty order that let the hell loose

The ministers-report-to-Kyari order and the emphasis it enjoyed, served as a touch on the lion’s tail, triggering an outpouring of bottled-up anger.

Attacks were unleashed at Buhari, his government and Kyari from different groups and individuals. Different media platforms, especially social media were awash with diverse reactions.

Mustapha was not left out in the fray

Though Kyari was majorly targeted in the attacks, Mustapha, Buhari’s SGF was not left out. The order that Mustapha should coordinate all Federal Executive Council (FEC) matters, including heads of all Ministries, Departments and Agencies (MDA’s) reporting to him, was interpreted by Buhari’s critics to mean the president’s delegation of his responsibilities to his COS and SGF.

Many feel that a cabal and not ‘necessarily’ Buhari, is responsible for the unprecedented recession Nigeria witnessed in 2016 and the cause of the current ranking of the country as the world capital of extremely poor people, worsening security situation and job losses, among others.

To these Nigerians, it was normal crying out against what looks like more power being handed to the supposed cabal said to be responsible for the situation, which the country has found itself.

A former national deputy publicity secretary of the governing All Progressives Congress (APC), Timi Frank, who was among those to express this fear, while reacting to the other on minister had said: “Nigerians prepare for more hardship”.

The Presidency wades in

To clarify Buhari’s order and placate the frays, the Presidency said nothing had changed in the roles of Kyari and Mustapha. According to Garba Shehu, Buhari’s spokesman, the CSO and SGF will still play the same role they played in Buhari’s first term.

Mustapha’s role, Shehu said, will remain among others, ensuring the effective coordination and monitoring of the implementation of government policies and programmes. And, that all cabinet matters must go through him.

The puzzle of who actually is in charge of President Buhari’s government, which Nigerians have been left to battle with since his first coming, is believed to have contributed to the angry reactions. A good number of Nigerians suppose that Kyari serves as the ‘master puppeteer’ in Aso Rock while Buhari serves as the ‘puppet’.

Though the ruling APC and the Presidency relentlessly continue to refute this assumption, the position of the First Lady, who has insisted that a cabal and not the husband, run things in Aso Rock remains a matter of huge concerns.
The open order on ministers to ‘report to my CSO and SGF’ for many Nigerians, appear to be a confirmation of Aisha’s fears.

As it stands, many visitors to Aso Villa, Nigeria’s seat of power, will have to contend with the existing power structure that keeps access to Buhari restricted unless Kyari and Mustapha show willingness to open the door.

Indeed, the full weight of the authority and influence they wield can better be appreciated if corruptive tendencies of power are placed on the board. Already, the hues and cries are visible as Kyari was once accused of working with a foremost telecommunications operator, MTN, to shortchange the government. For Mustapha, it’s yet morning as no scandals have been traced to him.

Notorious for his uncompromising stance, President Buhari’s directives can be said to have been cast in iron. His team, political jobbers and others eager to strut the corridors of powers will have to adjust themselves to the stark reality of dealing with the sentries at the Aso Villa gate.

What is uncertain is if the powers wielded by both sentries act as sufficient reminder to an acclamation once attributed to the former SGF, Babachir Lawal who, when accosted by newsmen to respond to the news of his suspension, rhetorically asked, “Who is the Presidency?”

Indeed, who is the presidency? Buhari, Kyari or Boss Mustapha?