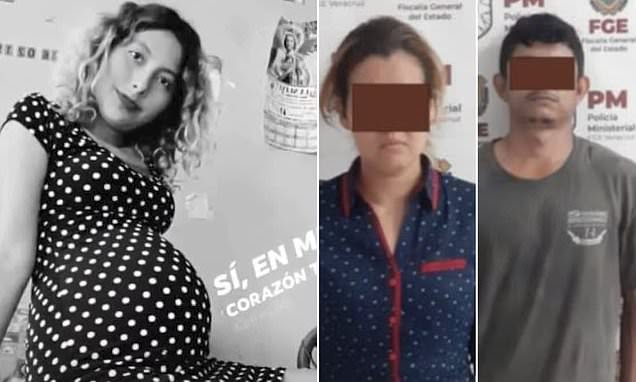 An eight-months old pregnant Mexican woman was on Monday killed, after two assailants reportedly cut open her stomach and stole her unborn baby, the police said in a statement on Tuesday.

The police statement said the victim, Rosa Isela Castro Vazquez, 20, was eight-months pregnant when she was kidnapped by two suspects who cut the baby out of her womb and dumped her body in Medellin del Bravo, in the Mexican state of Veracruz.”

The two suspects were arrested, according to the police after discovering a newborn baby in their possession, the attorney general’s office in the eastern state of Veracruz also said in a statement.

“The two perpetrators sliced open the victim to extract the fetus because the woman attacker was unable to have children herself, an official linked to the investigation told reporters on condition of anonymity.

“The suspects, a man and a woman, appeared before a judge on Monday accused of kidnapping and femicide.

“The victim was lured to her death through social media with a promise of clothes for her baby. This is the third case of its kind in recent years,” he said.

The victim’s sister said she had gone to meet a woman who had reportedly contacted her on social media to offer her baby clothes.

Footage of the meeting between Rosa Isela and the mysterious woman she met near the airport reportedly shows the woman arriving late and looking around nervously while talking to the victim.

Rosa Isela is then said to have got into a vehicle, never to be seen alive again.

“The State Attorney General’s Office, headed by Veronica Hernandez Giadans, reports that officials of the Ministerial Police arrested Gonzalo “N” and Veronica ‘N’ as alleged perpetrators of the crime of disappearance committed by individuals,” the police added.

Related Topics:Mexicopregnant woman
Up Next

Ugandan doctors kneel before President Museveni, beg him to seek seventh term in 2026