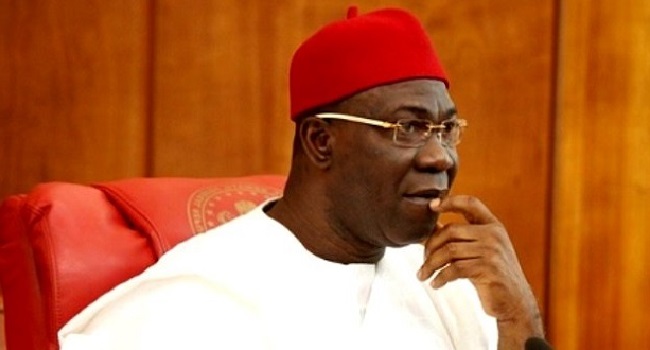 The Nigerian Police Force has suggested that the deputy Senate President, Ike Ekweremadu may not have been completely honest over the claim that there was an attempt on his life and his family members on Tuesday morning.

Ekweremadu, through his Special Adviser on media, Mr. Uche Anichukwu, had claimed that himself, his wife and son, escaped an attempt on their lives in Abuja, when gunmen invaded their home.

He said that one of the gunmen was however apprehended and is being held by the police.

But the police in a tweet on Wednesday night, refuted the claim, but stated that preliminary investigation revealed that it was a burglary, and that four policemen and one operative of the Nigeria Security and Civil Defence Corp (NSCDC) who were on duty at Ekweremadu’s house have been arrested.

The tweet stated that “Preliminary investigation carried out so far did not reveal assassination attempt on the life of the Dep Senate President,Sen. Ike Ekweremadu and his family but a case of Burglary.

“However, investigation is still ongoing to determine if there is any other motive behind the offence”.

“4 Police personnel and 1 personnel of the NSCDC on duty at the residence of the DSP at the time of the incidence have been arrested and currently in detention for investigation”.

The police also claimed that “There was no delay in Police intervention in the incident that occurred in the residence of the DSP”.