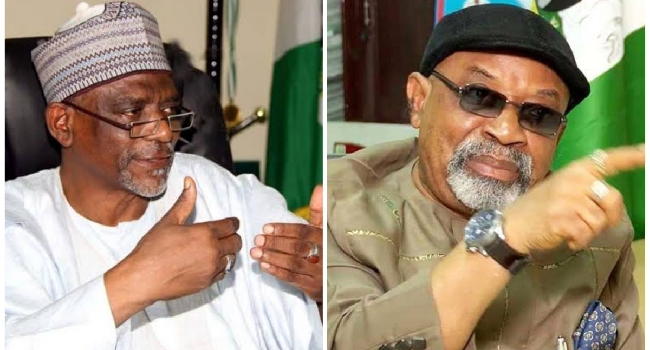 The Federal University Lokoja (FUL) section of the Academic Staff Union of Universities (ASUU) has called for the dismissal of Festus Keyamo, Adamu Adamu, and Dr. Chris Ngige, Minister of Labour and Productivity, for causing a bottleneck in the work process.

Keyamo is the spokesperson for the All Progressives Congress (APC) Presidential Campaign Council and the Minister of State for Labor and Productivity (PCC).

The union made this statement on Tuesday during a rally of support at the university’s Adankolo campus. In accordance with the directive from its parent body, it declared yesterday a lecture-free day.

Academics from FUL called an emergency congress before staging a placarded, nonviolent protest throughout the campus.

The placards read: ‘Say no to casualisation of lecturers’, ‘Ngige must go, Okija shrine awaits you’, ‘Pay our eight months salary’, ‘Stop playing politics with our education’, ‘We are not casual workers’ among others.

Addressing journalists after the protest, the union’s chairman, Dr. Joshua Silas, said the the Federal Government, represented by the three ministers, revealed clearly that it was out to destroy public universities.

“We are calling on the President to remove the ministers before they completely destroy our educational system. They want to turn university lecturers to casual workers. This government wants to destroy public institutions,” he stated.

The National Executive Council of ASUU will determine whether or not to resume the strike, according to Silas, who also added that they were only raising awareness of how Ngige, Keyamo, and Adamu were ruining the educational system.

“We also want to tell the public that we should not be blamed when we decide on the next line of action. This government wants to destroy education,” he added.

Moyosore Ajao, the varsity’s ASUU chairman, said: “As a law-abiding union, we have heeded the directive of the court which directed that we resume duty while the substantive matter is being heard.

“However, after resumption from strike, to our utmost dismay, the government decided that half salaries be paid to our members for the month of October 2022. This development is unacceptable and would be resisted by our union.

“The fact is that academics are not casual workers. Only casual workers receive pay pro-rate. The law of the land is also clear on this. Indeed, the National Industrial Court made it clear in a landmark judgment in 2020 that tenured staff cannot be paid pro-rata.

“It is very sad that the Minister of Labour is ignorant of the fact that academic staff engage in so many activities aside teaching duties. In fact, the primary duty of an academic staff is research, and there are other activities that have continued to engage their attention irrespective of strike or whether school is in session or not.”

ASUU has been at loggerheads with the government over its decision to pay members half of their salaries after the union’s eight-month strike ended.

The federal government had insisted that the union members would not be paid for the period the strike lasted, citing its ‘no work, no pay’ policy.

Adeleke, Oyetola at loggerheads over executive orders, sack of workers