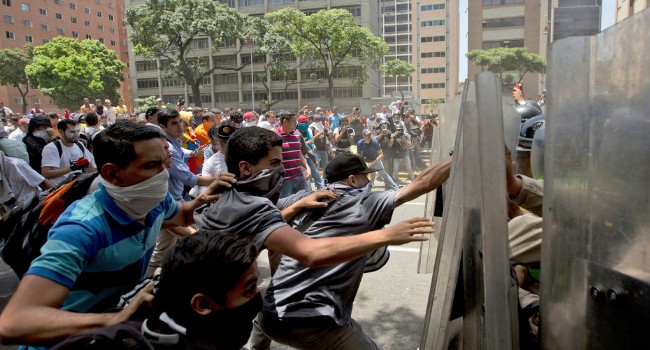 Venezuela’s socialist government said on Tuesday that an “attempted coup” was in motion in Caracas as Juan Guaido, the country’s opposition leader, took to the streets with military to spur Venezuelans to overthrow President Nicolas Maduro.

The President who tweeted as Guaido raised the pressure on his beleaguered regime, said he had met with regional defense bodies, which have expressed “total loyalty.”

“Nerves of Steel! I have spoken with the commanders of all the REDIs and ZODI of the country, who have expressed their total loyalty to the people, to the Constitution and to the fatherland. I call for maximum popular mobilization to ensure the victory of peace. We Will win!”

According to CNN, White House counsellor Kellyanne Conway also pledged support to Juan Guaido and his ongoing attempt at a coup.

“We support the people of Venezuela we’re sad that they have been starved by Maduro. They’ve been denied food and medicine and basic humanitarian needs having been met. The United States has gotten supplies there to them. Sometimes those have been obstructed or burnt. But we stand with the people of Venezuela and we stand with Juan Guaido” she said.

Also US Vice President Mike Pence has tweeted his support for Juan Guaido and his supporters.

He wrote “America will stand with you until freedom & democracy are restored.”

MOZAMBIQUE FLOODS: Save The Children appeals for funds to help cater for survivors