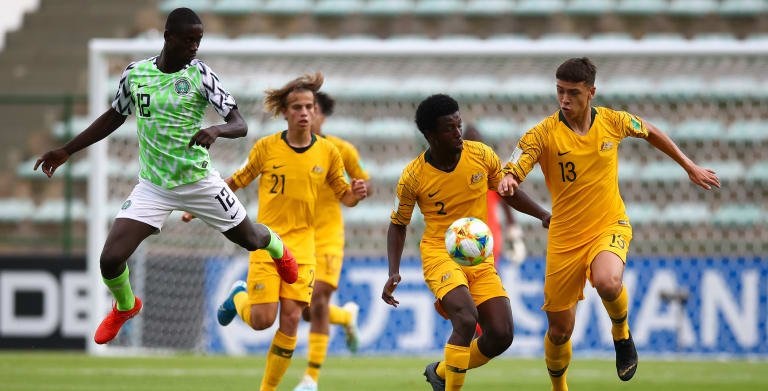 The Golden Eaglets of Nigeria were defeated 2-1 by their Australian counterparts in their final group game of the 2019 FIFA U-17 World Cup.

It was Nigeria’s first defeat at the tournament, as the team already qualified for the second round of the competition after winning their first two matches against Hungary and Ecuador.

The defeat on Friday night takes nothing away from the Manu Garba’s boys as they finish top of Group b, but the victory, meant everything to Australia, who finished third in the group with 4 points – enough to reach the round of 16.

Nigeria dominated the opening exchanges but it was Australia who opened the scoring in the 14th minute with Noah Botic slotting home off a perfect cross.

Just about seven minutes after, Peter Olawale restored parity for the Golden Eaglets with a fine effort, before Botic scored his second of the night through a penalty in the 54th minute.

In the other Group B match, Ecuador defeated Hungary 3-2 to book their spot in the Round of 16, as they finish second on six points with an inferior goal difference.

Third-placed Australia stand a high chance of reaching the round of 16 as one of the four best third-placed teams.