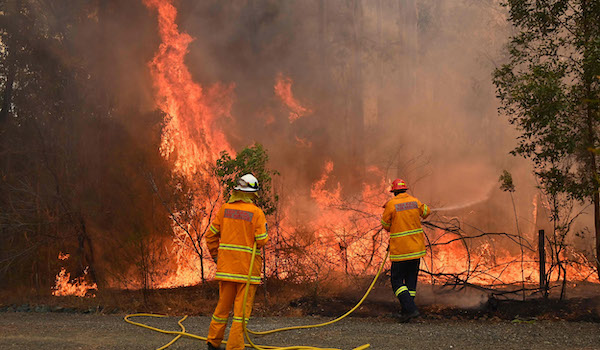 Australia’s most populous state on Monday declared a state of emergency as dozens of fires ravaged the countryside with authorities warning of “catastrophic” fire risk — the highest level of bush fire danger.

New South Wales state emergency services minister, David Elliott, said residents were facing what “could be the most dangerous bush fire week this nation has ever seen,” the Australian Broadcasting Corporation reported.

Three people have died in the fires that destroyed more than 150 homes since Friday, according to state police and fire officials.

Residents of Sydney, one of Australia’s largest cities, as well as Hunter Valley and Illawarra regions and the city of Shoalhaven have been told to brace for “catastrophic” fire danger Tuesday, with severe and extreme danger across large areas of the state on Tuesday.

New South Wales Police said Monday that some fires may start and spread so quickly there may be little time to get out.

“There are simply not enough fire trucks for every house,” it said in a statement. “If you call for help, you may not get it.”

As of Sunday, it said 64 bush and grass fires were burning across the state, 40 of which were still not contained.

New South Wales Ambulance Service warned Sunday that “even healthy adults and children can be impacted by the effects of heavy smoke which can result in lung irritation.”

Around 500 schools will be closed across the state because of the fire risk.

The ravaging fires have reignited the debate on whether Australia has taken enough action on climate change.

“The PM does not have the climate emergency under control,” he said on Twitter.

Morrison said Saturday that he had not considered whether the unprecedented fires scorching New South Wales and neighboring Queensland state were linked to climate change, according to the Associated Press.

Morrison’s deputy Michael McCormack said Monday that now was not the time for political debate on climate change.

“What people need now is a little bit of sensitivity, understanding and real assistance. They need help; they need shelter.”