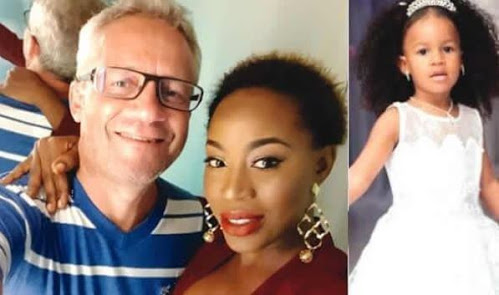 The real cause of the death of Nigerian singer, Zainab Ali-Nielsen, better known as Alizee, has been revealed following a report of a post-mortem examination conducted on the late musician.

Details of the post-mortem examination conducted on the late musician which was made known at a press briefing by the Lagos State Commissioner of Police, Imohimi Edgal, revealed that the artiste died from trauma.

Edgal said the trauma suffered by the entertainer emanated from the injuries inflicted on her head by her husband, Peter Nielsen.

The CP said, “The autopsy report revealed that Mrs. Zainab Nielsen suffered trauma as a result of the impact on her head.

“Secondly, the forensic experts revealed that there were bloodstains from the couple’s bedroom to the kitchen.

“Even though they were cleverly wiped from the floor, they were still able to detect the stains with the application of special chemical reagents.

“In addition, bloodstains were also discovered on the wash hand basins and on the hand towel the suspect used in wiping his hands after the commission of the offence.”

During the trial of Alizee’s husband, Peter Nielsen, 53, who allegedly killed his wife and poisoned her three-year-old daughter, Petra, at the Yaba Chief Magistrates’ Court, Lagos, the prosecutor, CSP Effiong Asuquo, told the court that the accused committed the offences on April 5 at his residence at Block 4, Flat 17, Bella Vista Tower, Banana Island, Ikoyi.

“The accused who was always at loggerheads with his wife had hit her head on the wall several times leading to her death; he also proceeded to poison his daughter.

“He had dragged their lifeless bodies under the gas to create the impression that they suffocated to death as a result of a gas leakage”.

The prosecutor also added that the offences committed by Nielsen (who was arraigned on two counts of murder) contravened Sections 223 of the Criminal Law of Lagos State, 2015 which prescribes death sentence for offenders.

Reacting to the death of his daughter, Alizee’s father, Ali Madaki in an interview said her late daughter’s husband was a peaceful companion for over seven years but started to hit his daughter last year.

Mr Madaki said, “I have known my late daughter’s husband for over seven years now. At the outset, he was of good character but last year, he started fighting his wife. Last November, a case was reported at the police station when he beat her to a coma. He then wrote an undertaking that he would never batter her again.”

He said Nielsen called him on that fateful day telling him he found my daughter and granddaughters body in the kitchen; “On Thursday morning, he called me; I was in Abuja. Since I missed his calls, I called back and he told me he saw my daughter and granddaughter on the floor in the kitchen. I asked what went wrong; he didn’t say a word and dropped the call. One of my two daughters staying with them called their mother and broke the news.

“We took the next flight to Lagos and found out she was dead truly. I didn’t even know my grandchild was dead too. I told my daughter to get Petra for me and we should go, then she told me she was dead too. I was shocked. The husband claimed it was gas suffocation that killed them. We know that gas doesn’t kill people that way. In the pictures, you would see bruises all over their bodies. They were strangled to death. I strongly believe he did it because their compound is highly secured. Whenever I visited them, the security operatives had to confirm my visit with them before I would be allowed in.”

Alizee’s father also noted that he wasn’t aware if her daughter’s husband was an alcoholic or was abusing drugs; “I don’t know if he has a history of being an alcoholic or drug addict. She once came back to our house in Abuja after being battered by her husband. She was there for almost a month. The man came and started begging that he was drunk. He said he consumed too much alcohol on the fateful day he beat her. Since they had been together for a while and he had never misbehaved, I accepted his plea and allowed Alizee to return to Lagos.

“My two daughters are in the police station right now to give their statements because they witnessed all that happened. They said he hit her head on the wall. In the morning, he then asked them where his wife was. They pretended they didn’t know what happened. They knew that if they had made any attempts, they could be attacked too. There were five people in the house when the incident occurred – my late daughter, her child, husband and my two daughters – one 12-year-old and the other 10-year-old. I have four girls; Alizee is my first child and her immediate younger sister works in a bank,” he added.

Meanwhile, reports say the Danish suspect accused of killing his wife and daughter is said to be “fully cooperating” with the investigators at the Lagos State Criminal Investigation and Intelligence Department, SCIID.