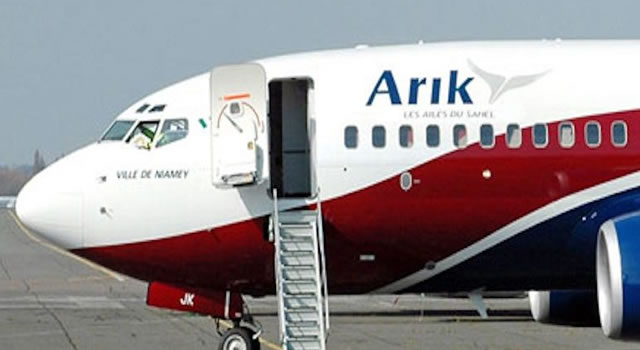 Workers in the aviation sector in Monday shut down all operations of Arik Air, and preventing the airline’s planes from flying.

The aviation workers under the aegis of the National Union of Air Transport Employees (NUATE) and Air Transport Senior Staff Association of Nigeria (ATSSAN) said the action was over alleged non-payment of staff salaries since April, despite placing 90 per cent of the workforce on compulsory leave and other anti-labour practices.

The action by the workers led to the total shut down of the airline, and grounding of flights, leading to complaints by stranded passengers.

Speaking on the development, Mr Innocent Atasie, Chairman, ATSSSAN, Arik Air told reporters that the workers resolved to shut down Arik operations nationwide when all efforts made to resolve the problem failed.

According to Atasie, the unions were miffed that there had been no payment of staff salaries since April after placing 90 per cent of the workforce on compulsory leave, adding that the strike would continue indefinitely until their demands were met by the management of Arik Air.

The demands, according to the unions, included payment of outstanding salary arrears, signing of Conditions of Service, remittance of Pension, Tax, and statutory deductions to the appropriate authorities and to resolve other anti-labour issues.

The unions also demanded the payment of salary arrears of seven months, with a commitment to pay salaries as at when due, henceforth.

Atasie further said that the unions also wanted the immediate review of all employee remunerations which had remained stagnant since the inception of Arik Air, over ten years ago, adding that the unions decided to shut down all operations nationwide when all efforts by the unions were aborted.

Related Topics:Aviation workers
Up Next