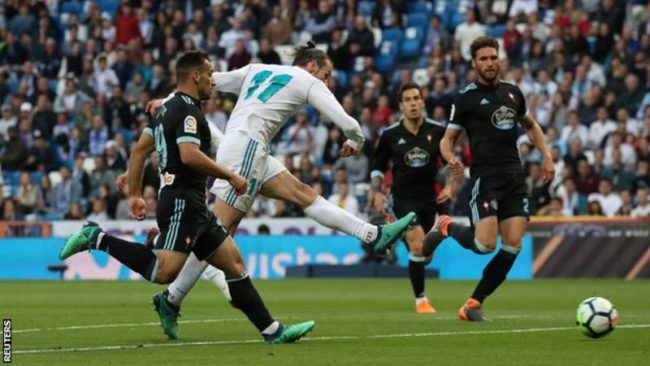 Real Madrid forward, Gareth Bale scored twice to help his side thrash Celta Vigo in La Liga at the Santiago Bernabeu on Saturday.

Bale burst onto Luka Modric’s pass to smash home the opener just 13 minutes into the game, and doubling their lead with a fantastic goal on the half-hour mark.

Isco made it three for the home side two minutes later, curling home a fantastic strike. Achraf Hakimi scored to put Real 4-0 up after the break and Sergi Gomez slid in an own goal, before Toni Kroos added a late sixth.

Wales forward Bale has now scored four goals in four games – a form that boosts his chances of featuring in the UEFA Champions League final against Liverpool on May 26.

Cristiano Ronaldo was out with injury, although he is expected to recover in time for the Champions League final, and captain Sergio Ramos was rested.

The victory for Zinedine Zidane’s side means they can still catch Atletico Madrid into second place on the final weekend.