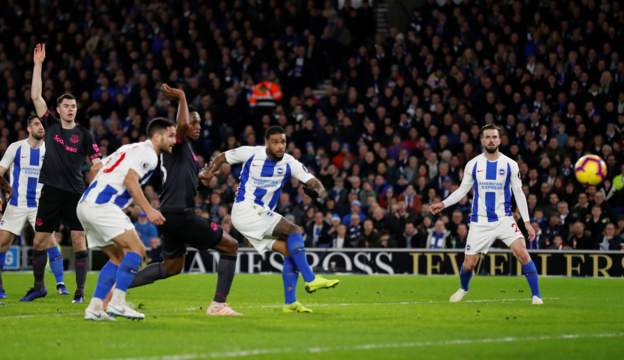 Super Eagles defender, Leon Balogun was an unused substitute for Brighton, who defeated Everton at home in a Premier League clash on Saturday.

Dutchman Jurgen Locadia scored a second-half goal which proved decisive as Brighton ended 2018 with another win at the Amex Stadium.

Brighton have won just two of their 14 meetings with Everton, and Saturday’s victory ended a winless run for the hosts.

The result leaves Everton in 10th and Brighton 13th.

At the King Power Stadium, Kelechi Iheanacho and Wilfred Ndidi were both in action as Leicester City fell to a 0-1 defeat to Cardiff City.

Coming from two big victories against Chelsea and Manchester City, the Foxes struggled and had thought they were heading to a goalless draw against Cardiff.

But Victor Camarasa’s stunning injury-time strike gave the visitors their first away win of the Premier League season.

At Wembley, Tottenham Hotspur were stunned by Wolverhampton Wanderers, who came from behind to win 3-1.

Wolves scored three times in the last 18 minutes to come from behind and seal their first win against Spurs since 2010.

Spurs remain second in the table but leaders Liverpool could go nine points clear as they face Arsenal later on Saturday.

In the other Premier League games played concurrently on Saturday, Fulham defeated Huddersfield 1-0 while Watford held Newcastle United to a 1-1 draw.