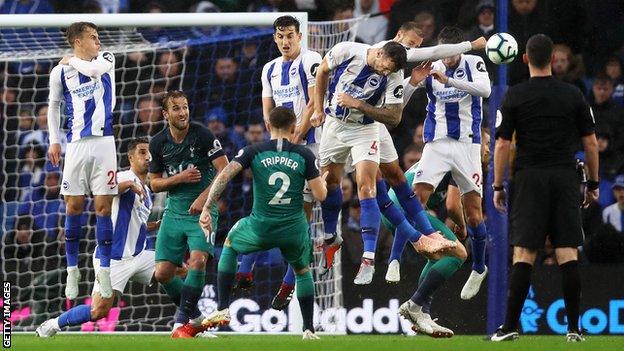 Super Eagles defender, Leon Balogun was an unused substitute for Brighton as they fell 2-1 to visiting Tottenham Hotspur.

The 30-year old, who moved to the club from Bundesliga side Mainz at the start of the season, has only made one start in six Premier League games and coming on as a substitute in another occasion.

For Tottenham, it was the end of three straight defeats as they scored in both halves to secure the win.

Spurs dominated possession in heavy rain in East Sussex and England striker, Harry Kane, opened the scoring in a first half of few chances through a penalty.

The visitors doubled their lead when substitute Erik Lamela swept in a Danny Rose cross from 12 yards in the 76th minute of the encounter.

Spurs thought they were heading to a clean sheet victory when Knockaert pulled one back in stoppage time, but Brighton were unable to salvage a point from the game.

Brighton’s next game is on Saturday when they travel to Etihad Stadium to face champions Manchester City, while Spurs will be playing on Wednesday in the League Cup against Watford.