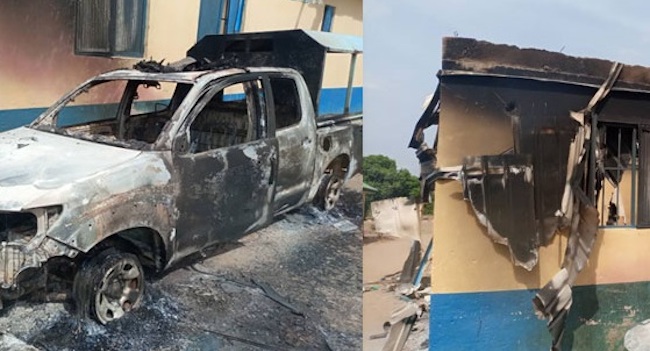 Niger State was engulfed in violence on Wednesday, April 21, as suspected bandits attacked a military base in the Zazzaga community, Munya Local Government Area.

Ripples Nigeria gathered that a civilian identified as Jacob Auta was killed and a military vehicle was stolen during the attack which took place around 4:00 pm on Wednesday.

According to eyewitnesses, the gunmen numbering about one hundred came riding on motorcycles as they stormed the area, shooting sporadically at the camp.

The camp was razed and some military vehicles were also burnt during the attack.

Although the soldiers were able to repel the attack, their properties were burnt by the bandits.

The camp was set up by the military in 2017 following incessant attacks in the area.

The latest attack on the military comes barely two weeks after bandits killed five soldiers, personnel of the Nigerian Security and Civil Defence Corps (NSCDC) and a civilian in an attack in a military base located at Bassa community in Shiroro local government area of the state.

Ten persons were kidnapped with seven motorcycles stolen and military vehicles burnt down in the attack carried out weeks ago in communities including Allawa, Manta, Gurmana, Bassa and Kokki all in Shiroro council.