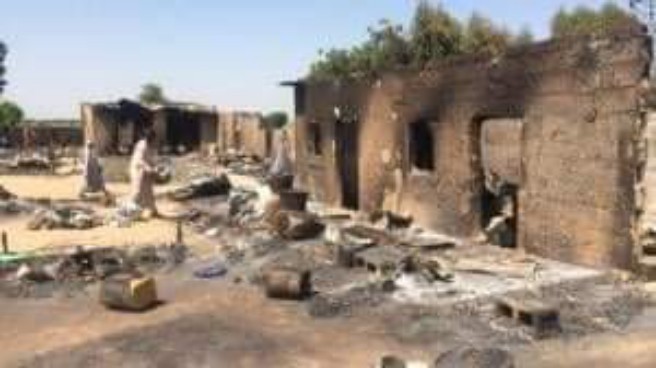 Some communities in Birnin Gwari local government area of Kaduna State have been burnt down after heavily armed bandits laid siege to them from Sunday to the night of Monday, according to the Birnin-Gwari Vanguard for Security & Good Governance in a statement on Tuesday.

The advocacy group said the terrorists raided the villages of Awaro, Unguwar Shehu, Rhema and some communities in Dagara, leaving about 5 people dead, while an unspecified number of others were abducted.

The bandits were also reported to have razed down several buildings in the communities including churches, mosques, shops and residential buildings.

According to the group, the attackers also ransacked food barns and stole grains, maize, livestock and other food crops.

The group added that several residents of the affected communities are now taking refuge in Internally Displaced Person Camps in Birnin-Gwari town.

“The bandits struck communities and villages of Awaro, Unguwar Shehu, Rhema and some communities in Dagara, adjoining the Kamuku Forest, from Sunday to the early hours of Monday (yesterday), burning villages as well as abducting people and carting away grains from those farming communities.

“Women, children and the aged were seen from late afternoon yesterday up to late-night trooping Birnin-Gwari as Internally Displaced Person’s (IDPs).

“The communities were dislocated from their settlement barely forty-eight hours after armed bandits clashed with a notorious warlord in Damari that led the community escaped to Dogon-Dawa as refugees.

“At the moment, the villages of Kimbi, Katakaki in Kakangi ward in Birnin-Gwari neighboring Kuyanbana Forest in Zamfara State was sacked by bandits, while farmers were unable to harvest their crops due to incessant armed bandit attacks and abduction,” the group said in the statement made available to Ripples Nigeria on Tuesday.