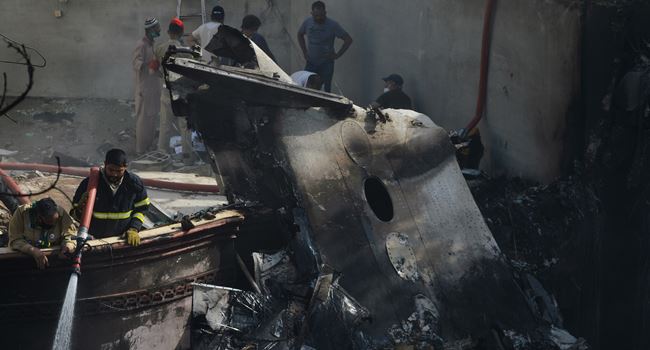 A Bank executive and one other person have been pulled out from the wreckage of an Airbus A320 belonging to Pakistan International Airline that crashed due to engine failure on Friday.

The crashed aircraft, flying from Lahore to Karachi, had 98 passengers and 8 crew on board.

The two survivors’ names were given as Zafar Masood, said to be the President of Bank of Punjab and Mohammad Zubair.

According to reports, the plane was attempting to land at the Karachi’s Jinnah International Airport after flying from Lahore before it crashed into a residential area of Karachi at about 14:30 local time (09:30 GMT).

Pakistan’s Ministry of Health, which had said three people were alive from the crash, revised it to two, while the remaining passengers and crew are believed have died.

Also speaking, Faisal Edhi of the Edhi Welfare Trust, said that around 25 to 30 residents whose houses were damaged by the plane have also been taken to the hospital, mostly with burn wounds.

“At least 25 houses have been damaged in this incident.

“The first priority is to rescue the people. The main hurdle is narrow streets and presence of ordinary people who gathered at the place after the crash but they have been dispersed,” Edhi said.

Related Topics:PakistanPakistani plane crash
Up Next