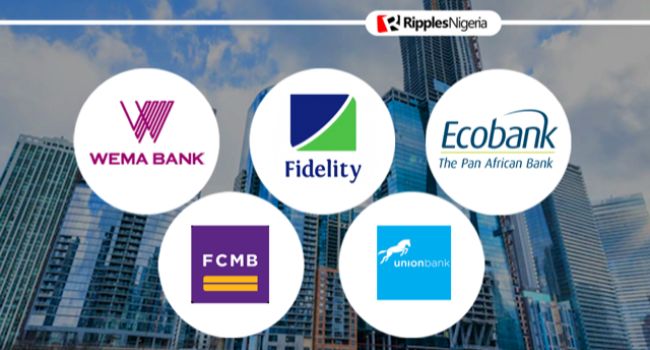 For investors with Bank stocks in their portfolio, as the capital market enters into the second half (H2) of 2022, it’s important to know what went down in first half (H1) to enable you make an informed decision going into the last six months of the year.

After six months of trading in the Nigerian bourse, only one of the tier-one banks made it to the best performing Bank stocks in H1, reflecting investment loss for UGAZ shareholders.

During the period under review, Ripples Nigeria analysis showed that the underdog bank stocks like Wema Bank, Fidelity Bank, Ecobank, First City Monument Bank (FCMB) and Union Bank of Nigeria (UBN), were the most sought after, piling up gains for investors holding their shares.

Takeaways: What you need to know

• Ripples Nigeria analysed the trading activities of the 13 commercial banks listed on the stock market. Eight of the bank stocks appreciated, while five equities dipped during H1 2022.

• Four banks saw their shares soar above 10%, with three stocks growing between 0.5% and 5%. The best performing stock was Wema Bank, while GTBank was the worst performing share.

• Despite its share appreciating by 1.75%, FBN Holdings failed to make the top five, meaning only one tier-1 Bank stock was represented on the list.

• Ripples Nigeria data analysis showed that investors were not trading based on household name on the financial sector exchange floor, considering the performance of the tier-1 stocks to the lesser brands

• FUGAZ failed to showcase any growth prospect in H1 of the capital market activities, thus, investors taking their money elsewhere

Wema Bank ended H1 2022 as the best performing equity, after its share blew through the roof, appreciating by 343.05%, following its share ending June at N3.19kobo, in contrast to the N0.72kobo it started the year with.

• The demand for Wema Bank shares in the capital market saw the firm’s share hit a 52-week high of N3.85kobo. During the same period, it had traded at 52-week low of N0.56kobo.

• The interest in Wema Bank’s share resulted into a dramatic growth in the lender’s market capitalisation, which closed H1 at N41.91 billion, far from the N9.25 billion it started January with.

• This is a gain of N32.65 billion, which helped Wema Bank maintain its spot as the 12th most valuable banking entity in Nigeria, leaving the class of under N10 billion, which it shared with Unity Bank.

After six months of trading, Fidelity Bank outperformed tier-1 lenders in the capital market in H1, as its share rose to N3.42kobo. This is a 34.11% rise when compared to this year’s opening of N2.55kobo.

• The bullish run cemented Fidelity Bank’s 9th position on the most capitalised banks in the Nigerian bourse, after ending the period at N95.61 billion.

• Fidelity Bank market capitalisation had gained N21.73 billion within six months, rising from the N73.88 billion it started the first half of the year with.

Ecobank shareholders saw their investment in the firm appreciate by 21.83% between January and June 2022, after demands in the stock market triggered an upward trajectory of the share, hitting N10.60kobo, from N8.70kobo.

• Rising investors’ confidence in Ecobank added N34.86 billion to the financial institution’s market capitalisation, which settled at N194.50 billion, in contrast to the N159.64 billion the lender was valued earlier in the year.

• The uptick in the value of its share led to Ecobank leapfrogging Union Bank on the list of the most capitalised banks, to become the 7th most valuable lender.

FCMB was the fourth best performing Bank stock in the first half of 2022, creating an investment growth of 15.71% for its shareholders, thanks to the share value appreciating to N3.46kobo after six months.

It had began trading for the year at N2.99kobo, but the cost of FCMB share rose N0.47kobo between January to June this year.

• Following the strong gains in share value, FCMB market capitalisation grew by N9.30 billion to N68.51 billion from N59.21 billion. It ended the period as the 10th most valued bank.

Union Bank was the only bank that made it into the top five best performing Bank stocks despite posting a growth below 5%. It’s share had appreciated by 4.23% to sell at N6.15kobo, having traded at N5.90kobo at the start of this year’s first month.

• The hike drove the market capitalisation of Union Bank to N179.09 billion, gaining N7.28 billion during the six months period.

• The market cap was previously N171.81 billion at the start of January. The growth made Union Bank, an old generation lender, the 11th most valuable financial institution.