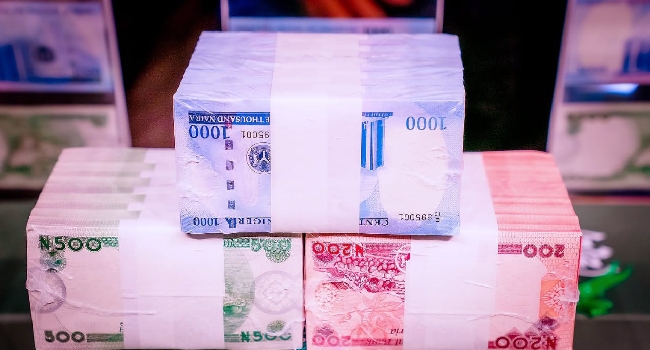 Commercial banks in the last 24 hours have been sending messages to Nigerians announcing the availability of the new naira notes.

In messages sent to their customers on Monday, January 9, 2022, a couple of banks in Nigeria indicated that the new notes can now be accessed on their ATMs.

The banks’ messages followed an order from the Central Bank of Nigeria that banks should load their ATMs with the new notes.

Among the banks is United Bank for Africa (UBA) which announced that its customers can now get the newly redesigned notes at its Automated Teller Machines across the country.

UBA message reads: “We are happy to inform you that the newly redesigned naira notes are now available at all UBA ATMs nationwide.

“Please note that the maximum daily cash withdrawal limit for these notes at our ATMs is N100,000”

Also, Stanbic IBTC, Zenith Bank, Access Bank and GTCo announced that the new notes are also available on their ATMs but that customers can only access N200 notes via the withdrawal points.

Despite the announcement, Ripples Nigeria can confirm that ATMs are still dispensing the old notes.

When asked, a senior bank official in Ikotun area of Lagos State revealed that there were not enough of the new notes in the branch.

READ ALSO:Banks in dilemma, as CBN bans withdrawal of new naira notes over the counter

His statement contradicted an ealier statement from the CBN that there were enough of the new notes with the banks.

CBN’S Director of Corporate Communication, CBN, Osita Nwanisobi also noted that adequate plans had been made to heighten the circulation of the new notes.

He stated that speculations that the banks did not have enough new notes for circulation were false.

Nwanisobi however urged the general public to continue to use the old notes as they remain legal tender, promising that the new notes would be adequately circulated.

Responding to the directive to the banks to load ATMs with the new notes, Nwasinobi explained that the directive didn’t categorically ban over-the-counter transactions but was issued as a persuasion to dispense via ATMs to increase circulation.

He said: “There is what we call moral suasion; we had a meeting with the banks and we all agreed that we can begin to put the new notes in the ATMs so that people would see and boost circulation.

“Yes, you can say it is a directive. We keep reviewing and my worry is by next week when new notes are being paid across the counter people would say they are flaunting. “We had a meeting and we had moral suasion because people are complaining they are not seeing new notes. So, that also doesn’t mean that banks cannot pay over the counter.”

NGX: Market cap rises by N256.3bn despite losses in Wema Bank, others