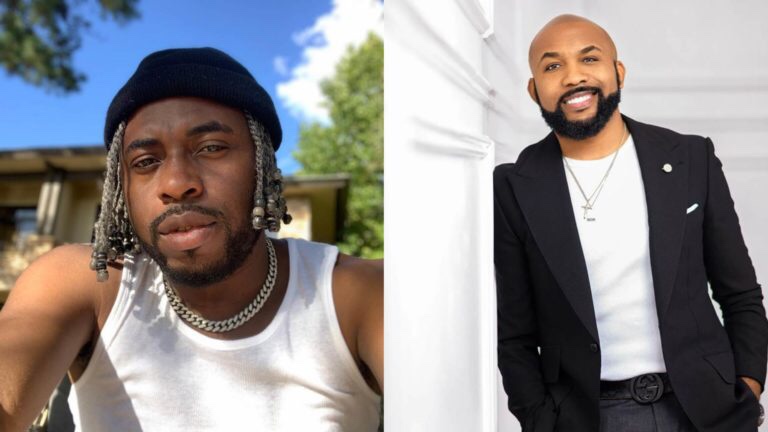 Samklef had on Friday night slammed the Empire Mates Entertainment (EME) boss for denying him the dividends for his contribution to Wizkid’s debut single.

He was reacting to Banky W’s interview with Ebuka Obi-Uchendu on The BlackBox where he alleged that Wizkid owed EME three albums as stipulated in their contractual agreement.

Samklef, who was not impressed with the music executive’s claim, said in a Live Instagram session that Banky W had failed to properly compensate him for his input in the hit song.

He also posted a similar message on his Twitter page where he wrote:

“Claiming all my 11 years royalties for WiZkid super star album in a bit. My Laywers will reach out. It’s 50/50. Anybody wey don collect my money better reach out o! Samkef fine were o! Make dem tag Banky o! My money go don plenty o! Before him go use am campaign for election.”

In a follow-up post, Samklef said his name was yanked off as the contributing artiste and primary producer of the song.

“Nigerians make una see o!! Dey took my name off and put Steve Micheal as the composer for pakurumo. @bankywellington how far now? How did we get to this? Dm me ur email bro. No time to play. Let’s fix things and move on. @sonymusic @sonymusicafrica,” he added.

The EME boss immediately moved to the comment section of the post and asked the music producer to direct his grievances to the appropriate channel.

Banky, who also distanced himself from the control of the song’s proceeds, cautioned Samklef to desist from spreading lies about him in the public.

He wrote: “@samklef I don’t think you understand that my name is not there and was NEVER there. EME’S name is not there. We have never taken a dime of these royalties and never will. We have never controlled them. You need to take this up with whoever is controlling this and for goodness sake stop talking about me. I’m not the one in charge. I’m minding my business, please handle yours.”

Related Topics:Banky W . Samklef
Up Next

BBN star, Boma Akpore claims he was miraculously healed after a spiritual attack