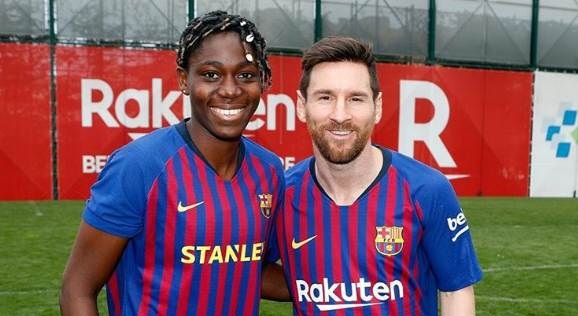 Reigning African women’s player of the year, Asisat Oshoala, has continued to receive accolades from football stakeholders following her recent feat at the 2019 CAF Awards.

The latest cheering for Oshoala is coming from her club manager, Lluis Cortes, who says it is a privilege to have her playing for Barcelona Ladies.

Oshoala, 25, joined the Spanish giants first on loan from Chinese club Dalian Quanjian in January 2019 before sealing a permanent move in May of the same year.

She had scored 14 goals in 14 games this season, including her four goals against Takom in the team’s last game in the in the Primera Division Femenina.

“Having the best African player (Asisat Oshoala) in my team means a lot,” Cortes told Goal.

“She earned the award and they aren’t giving her for who she is but based on merit. This in part benefits us, from her success and her individual performances.

“We are privileged to have her because she is a very different player with a different physical form in comparison to any other player in the league.

“Having such a unique player that’s so different from what you can find on the national market is an advantage for us and it’s our responsibility to know in what moment to play her.

“Her attitude and her game coming back from the holidays has been excellent and we hope this continues,” she added.