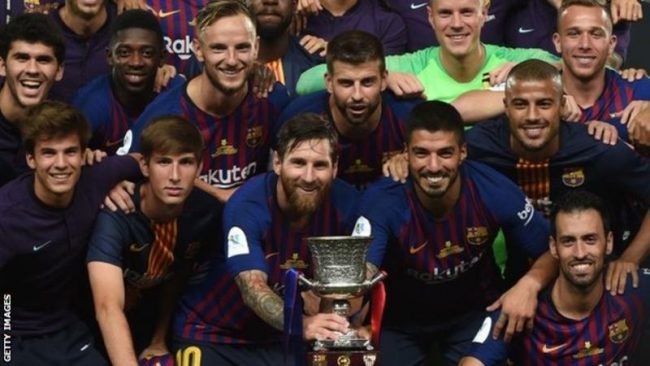 The La Liga champions escaped a late equaliser from their opponents as Marc-Andre ter Stegen, who fouled Aleix Vidal in the box, saved a last-minute penalty to secure win in regular time.

Sevilla had gone ahead by a goal from Pablo Sarabia when the video assistant referee (VAR) gave a goal which had been ruled out for offside.

But Barca levelled just before halftime as Lionel Messi’s free-kick hit the post and the back of goalkeeper Tomas Vaclik before Gerard Pique placed the ball inside the net.

Ousmane Dembele then sealed the game when he lashed a shot home from 20 yards via the underside of the crossbar in the 79th minute.

Barcelona have taken part in nine of the last 10 Super Cups, but this was the first to take place over just one leg and in a foreign country.

The champions – who handed debuts to Clement Lenglet, Arthur and Arturo Vidal – win for the sixth time in nine years.

The Super Cup is a curtain raiser for the new season. La Liga kicks off next weekend, with Girona Fc playing against Real Valladolid on Friday night.