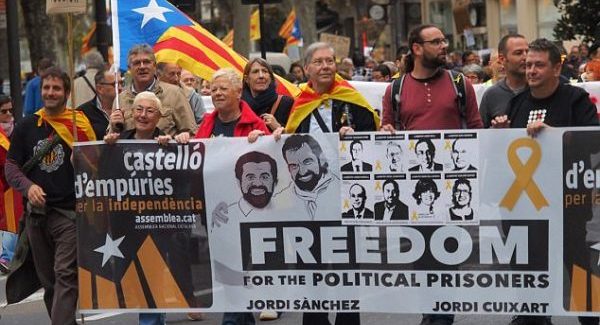 Wild protests have erupted in the Basque region of Barcelona after a Spanish High Court detained five Catalan politicians for their role in the region’s secessionist bid staged in October last year.

Thousands of protesters have filled the streets of Barcelona carrying the single-star flag of the presumptive Catalan Republic with signs and slogans such as “Freedom for Political Prisoners”.

Those jailed without bail by Spanish Judge Pablo Llarena include the president of Catalonia’s regional government, former regional legislators Josep Rull, Raul Romeva and Dolors Bassa, as well as the ex-president of the parliament, Carme Forcadell.

According to the Spanish Judge, an investigation into their pro-secession moves “has reflected clear insurrection”.

Recall that Catalonia declared independence from Spain in October 2017 after a political back-and-forth between the regional and national governments.

The declaration was however went unrecognised by the Spanish government and the international community.