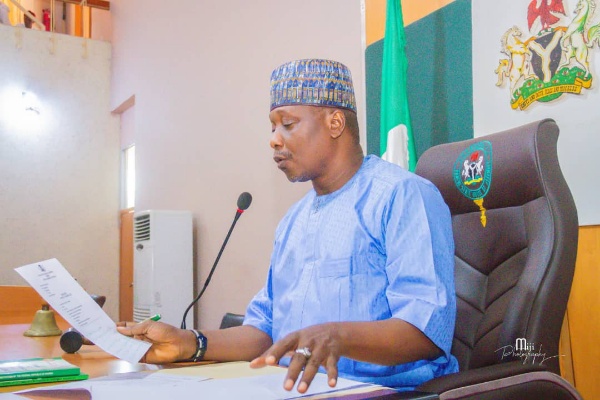 The cold war between Bauchi State House of Assembly and the Executive arm following a brush with one of the Commissioners on Monday took a different dimension as the House withdrew its earlier confirmation of Dr Aliyu Usman Tilde as Commissioner in Bauchi state as well as passed a vote of no confidence on him for alleged disrespect to the assembly.

The decision of the House followed the adoption of a motion moved by the Chairman, House Committee on Education, Mohammed Babayo Akuyam during an emergency plenary held on Monday just on the matter.

Babayo Akuyam while moving the motion under matters of urgent attention described the attitude of the Commissioner of Education to the 9th Assembly as very unfortunate and disrespectful to the House.

He explained that the House Committee had served the Ministry with schedule date for budget defence since November 24 to appear before the Committee on the 2nd December for its defence of allocation in the budget proposal.

He however said that, “Despite that the Commissioner came over one hour late to attend the budget defence which did not go down well with the committee, he began to ask who we are”

According to Babayo Akuyam, “Legislative arm belongs to the three arms of Government, the executives, legislature and the judiciary, so for him to ask us who we are, is an insult to the 9th assembly,”.

Deputy Speaker of the House, Danlami Kawule in his presentation Said that it was unfortunate that the Commissioner chose not to cooperate with the House in the 2022 budget defence process.

Also, Yunusa Ahmed described the Commissioner’s conduct as unbecoming, adding that it speaks volumes of the fact that he runs the Ministry alone saying, “I believe the citizens would celebrate if we pass a vote of no confidence on the commissioner of Education,”

The Speaker, Abubakar Sulaiman said that the Commissioner’s behavior to the Committee was unfortunate and not acceptable.

He explained that the House unanimously agreed that a vote of no confidence should be passed on the commissioner of education as well as withdrawal of the confirmation earlier given by the House after he was nominated by the Governor.

According to him, “The House also assured the good people of Bauchi state that nothing would stop the budget defence process of the Ministry, the permanent Secretary would continue with the defense process,”.

Meanwhile, Sani Bura, Adviser on Liaison Assembly matters to the Governor, Sen Bala Mohammad, said that the House had done its part and it was the prerogative of the Governor to take decisions.

He assured that he would relate what transpired to the Governor who will then decide on what the next line of action on the issue would be.